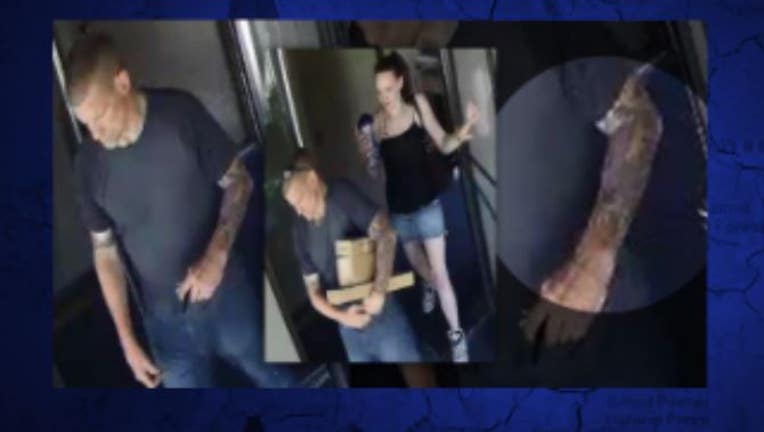 WANTED IN SEATTLE -- The joke’s on a couple of mail thieves in Seattle because the packages they stole from a condo building had razors and biking shorts in them, but it just as easily could have been something valuable, so detectives are hoping you recognize them. Surveillance video from the condo building on Roy St. shows a man letting the couple inside. Police have tried to get him to tell them their names, but he's not talking so far, so that's why detectives need your help. The video shows the guy with the blonde hair come back down and start looking at the packages that belong to tenants in the building, then he goes back upstairs and returns with the girl, snatches the mail off the shelves and out the door they go. “You need to remember that every piece of mail that's stolen is a felony,” says Ret. Det. Myrle Carner with Crime Stoppers of Puget Sound. “So, when you take a look at them, there's a female and a male. We don't know the names of either one. At this point we're looking at the male as the main suspect. Whether she's involved we're not clear, but we need both their names and we need their locations so we can clear it up.”

The guy has tattoos all the way down his left arm and some on his right bicep as well and close-cropped blonde hair. The woman with him doesn't have any visible tattoos. She's thin with dark hair and a fair complexion. If you know who these two are, call an anonymous tip into: CRIME STOPPERS: 1-800-222-TIPS You must call the Crime Stoppers hotline with your tip to be eligible to receive a cash reward for information leading to a fugitive’s arrest. CLICK HERE for information on how to TEXT A TIP to Crime Stoppers