One suspect has been arrested after carjacking a Mountlake Terrace.

WANTED IN MOUNTLAKE TERRACE - One suspect is in custody, but Mountlake Terrace police have not identified the suspect with the gun in the blue and red jacket. 20-year-old Jamal Osman from Kent was arrested in the Kelso area of Cowlitz County early Saturday morning following a high-speed pursuit. Detectives say he was in the stolen Honda with a 15-year-old from Seattle and a 17-year-old.

Detectives say neither of those teens is the second suspect in the carjacking case. They are asking for the public's help to identify the second suspect as Osman was not helpful. He is being held in the Snohomish County jail on $25,000 for Investigation of Robbery. Unfortunately, the stolen Honda is not drivable as it was damaged during the pursuit.

In a Facebook post from the Cowlitz County Sheriff's Office, their post reads: "At about 0100 hours of September 26, 2020, WSP troopers attempted to stop an unlicensed silver 2019 Honda passenger car traveling at speeds of around 90 mph on I-5 North, near Kelso. The vehicle turned off its headlamps, failed to stop, and reached speeds of over 120 mph on the freeway. Troopers lost sight of the vehicle after it took Exit 40 and went up Holcomb RD in Kelso."

Deputies were able to pin the vehicle near Cowlitz Way. Three male subjects fled on foot. Deputies learned the vehicle was stolen during a carjacking in Mountlake Terrace. The victim, an Uber Eats driver, was approached by two males who had a gun. They took his cell phone and car.

A 17-year-old male was located hiding near a porch. The subject had an outstanding warrant for Absconding While on Parole. CCSO K-9 Icarus located two male subjects hiding in the thick brush off the end of Cowlitz Way, above the Exit 39 South off-ramp. The two subjects were identified as a 15-year-old Juvenile from Seattle, and Jamal Osman, age 20, Auburn, WA. Osman identified as the driver of the stolen Honda.

Washington State Patrol, Kelso Police, Cowlitz County Sheriff’s Office, and Mountlake Terrace Police Department were all involved in the investigation. Based on the information we received, there are no outstanding suspects in Cowlitz County involved in this case at this time.

This despicable crime will offend all of you who are out there working hard every single day, trying to feed your families.

A home surveillance system shows two suspects point a gun at a delivery driver in Mountlake Terrace while he was out bringing food to people. They demanded his keys and his phone. Then, they jumped in his car and stole it, leaving him just standing there. He has a family to support, but these criminals don't care.

We are protecting the victim’s identity for his safety, but he agreed to speak with us in hopes it helps police find his car and the two thieves who took it.

On the surveillance video and right before the robbery, you can hear one of the suspects asking the victim, “Can you tell us where the bus stop is?” What happened next to the victim was terrifying for him. "Then, they start to show me a gun, a small gun and then they asked me to give them a key, my car key.” They also demanded his phone, before jumping in his silver 2019 Honda Accord Hybrid to steal it, with his baby's car seat in the back.

“He was actually afraid that they might shoot him. They threatened to shoot him twice, so he does appear calm, but this actually deeply affected him,” said Mountlake Terrace Police Det. Pat Hatchel.

Detectives say when they looked at another clip of video, they noticed a red Dodge following the victim to the home, then the two suspects walked up the driveway to wait for him. They suspect they stole the Honda to use it for another crime.

“Someone's probably going to get hurt with this, or more people will get robbed if we don't find them, so we do need to find them very, very badly,” said Det. Hatchel.

The driver says he'd never worried before about something like this happening to him, now he's trying to figure out what to do next. “That's the only income I get, delivering food, especially now in the COVID time.” 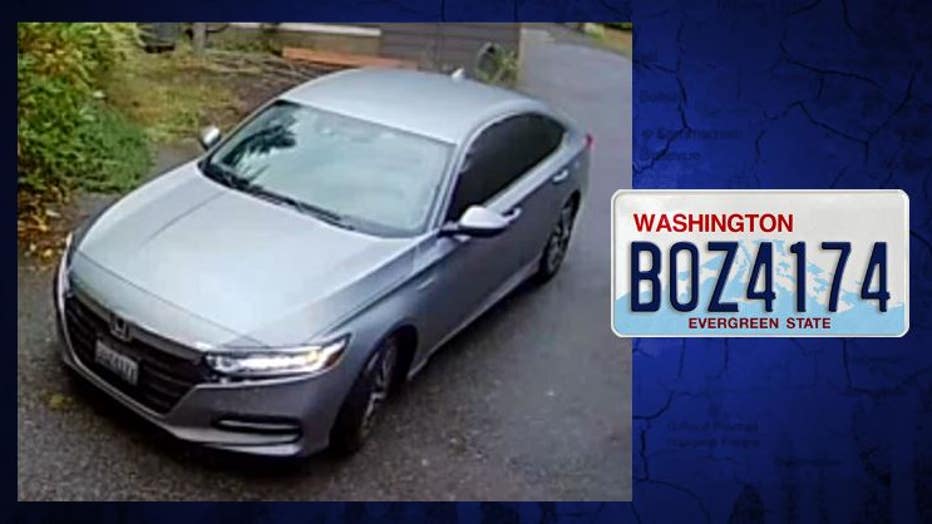 Call 911 or Mountlake Terrace Police if you spot it.

As for the suspects, detectives are hoping you know their names and if you do, Crime Stoppers is going to pay you a cash reward of up to $1,000 for the information. Just call 1-800-222-TIPS(8477), or submit an anonymous tip through the P3 Tips app on your cell phone.