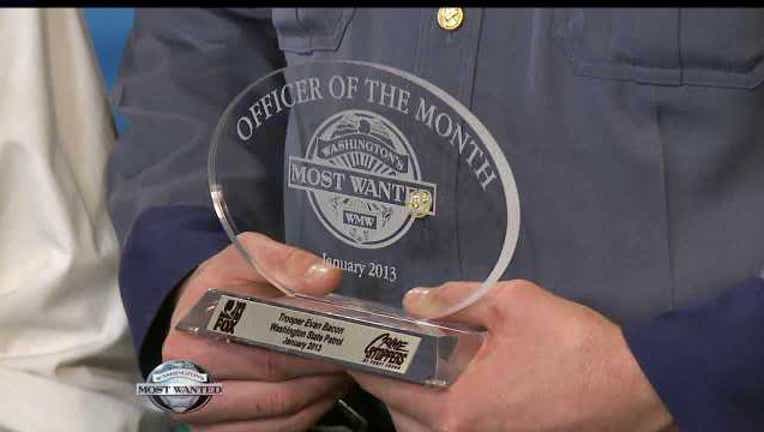 Helping law enforcement catch child predators is one of our core missions, and a State Patrol trooper who did exactly that is being honored as our Washington's Most Wanted ‘Officer of the Month’ for January. “It’s pretty big,” says Trooper Evan Bacon. “I have children of my own so it`s a huge thing." For Trooper Bacon, it started as a routine one-car crash on 405 in King County. “I got to the scene and it was pretty ‘run-of-the-mill.’ The vehicle had some defective equipment that caused it to fall in the roadway. It slid off and was disabled.' Trooper Bacon helped get it towed and talked with the 21 year old driver. Hours later, he saw an alert go out. “I noticed a call that came down from one of our other districts, and it showed that the vehicle identified in that collision a couple hours prior was wanted by the Monroe Police Department.” Wanted was a suspect in a child rape. A quick call to the tow truck company gave them an address. “We ended up coordinating to go contact the residence -- do a ‘knock and talk’ -- and bring the subject out on the ruse of a collision investigation, so I needed to follow up on it. He came out. I took him into custody. No problems. He pretty much just hung his head down like, ‘You got me.’” Assistant Chief Curt Hattell commends Trooper Bacon for looking beyond the license plate. “This is an exceptional example of what we want to see in at Trooper. Not to embarrass Trooper Bacon here, but he really is the epitome of what we`re looking for. Somebody that`s out there doing that core mission of traffic enforcement, but looking beyond that stop and taking the job very, very seriously.” In addition to the Washington’s Most Wanted trophy, Trooper Bacon receives a $100 gift card, both donated by Jerold McGlothlin from ‘25/7 Protection Security’. "Anything we can do to remember that these people are not the bad guys presented on the news -- there are real bad guys -- that officers are the people that we expect and hope they will be there for us so if we can make it easier even for a night, it`s great." For Trooper Bacon’s part, the arrest was more than just doing his job. “Kids are the innocent things we have in society, so you have to protect them, so taking this guy off the road, off the highways, off the city streets -- is huge for me. Congratulations on your vigilance, Trooper Bacon, and we`re very proud that you`re our January Officer of the Month.