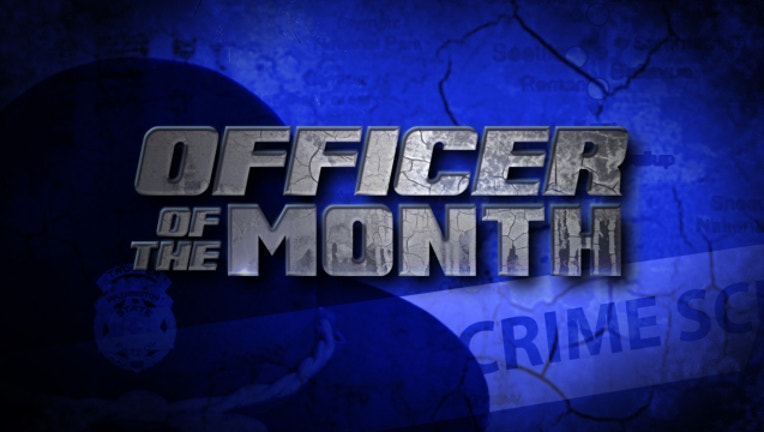 SEATAC -- What a capture it was! We featured fugitive, Aaron Latta, for an escape warrant issued by the Department of Corrections. It turns out, he's now also accused in an armed carjacking in Seattle last month. Latta is in jail right now, because of a tip from one of you -- and a quick thinking officer! When SeaTac Police Master Patrol Ofc. George Ireland pulled into the parking lot of the hotel he knew Latta was at, he says Latta was pulling out in his truck. "We knew that this fellow was going to be staying at a hotel in our city, so we set up around there myself and my partners. We were nose to nose. He kind of got that ‘deer in the headlights’ look, threw it in reverse, backed out, and made a couple of reckless turns to get out of that parking lot in a hurry.” Surveillance video from across the street shows Ireland's patrol car right behind Latta. "First opportunity I got, I rammed his car,” says MPO Ireland. ”He was still going in reverse out into the street, disabled his vehicle, and he fled on foot. You can see Latta on surveillance video racing across a parking lot. His truck rolls and hits a tree. Officers caught him after a 20 minute foot chase. MPO Ireland says, "He was kind of whiny, he really was. I think he got a little cut on his chest from jumping over a fence, wanted an aid car, complained about his heartbeat and everything else." Master Patrol Ofc. Ireland works for the King County Sheriff's Office, and is assigned to the city of SeaTac. Sheriff John Urquhart praises him from doing what he had to do to stop Latta, even if it meant denting his cruiser. “This is a great example of not only what Washington's Most Wanted can do, but the results that can come to our officers when they make good arrests like this. I'm so happy that Deputy Ireland used his head. He stopped the vehicle before it got out on the highway and we had a pursuit. I'd much rather chase them on foot and catch them that way. That's exactly how I want these things to be handled and that's how it was handled.” Seeing the video, you can see the teamwork it took. “Everbody is talking,” says MPO Ireland. “We're communicating on the radio. We've got great people out there with partnerships with our other contract cities like Burien, White Center deputies, county people coming. When something like this happens, everybody pitches in. SeaTac Police Master Patrol Ofc. George Ireland, great work! -- and congratulations on being honored with Washington’s Most Wanted’s Officer of the Month award!