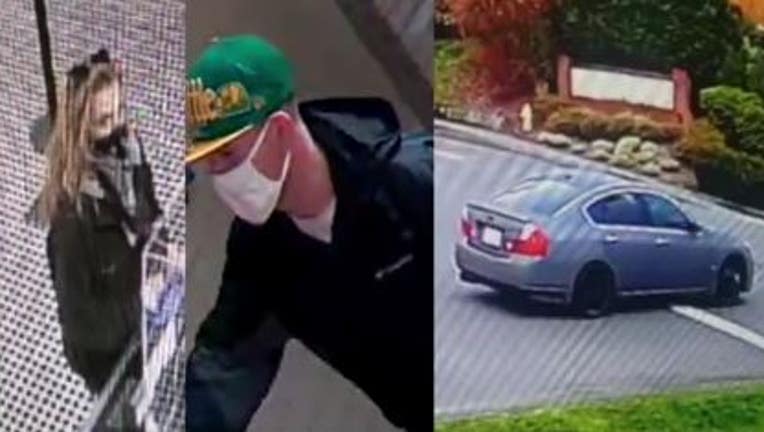 WANTED IN NEWCASTLE - Newcastle Police are asking for the public’s help to identify a person of interest in a home burglary on April 10th and a woman who used credit cards stolen from the house.

Detectives say the man pictured above wearing an old-school Sonics hat and black and white ‘Vans Old Skool’ shoes was seen on camera walking from house to house. "What they are doing is seeing if anybody is home. If nobody answers, then they are looking to find a way to get in," said Newcastle Police Chief Jason Houck.

He was riding as a passenger in a slate gray Infinity M35 or M45.

Video showed him approaching the house of a family who was away having dinner. "Knocks on the door, nobody answers and then within three or four minutes, they get an alarm, a sensor in the back of their house that indicates somebody had broken in," said Chief Houck.

Detectives say the victims came home to find that the suspect had gotten in through a window in the back of the house that was accidentally left unlocked.

"We ran upstairs to find that our bedroom and our dressing room and everything were totally ransacked. All the doors were out and everything," said Jasmin who asked not to use her last name for safety. She says the thief stole credit cards, documents, Egyptian currency and numerous extremely sentimental rings, bangles and necklaces that had been passed down from generation to generation.

"My father passed away in 2018. Two rings he had were stolen, so now I don't have my father. I don't have any memory of him. It's very hard. It's very difficult," said Jasmin. She worries about what could have happened if her children had been home. They were taught not to open the door to anyone. "The children were in shock. They didn't understand what's happening."

Newcastle Police say this burglary matches others in the area. "We think they are around. They’ve done it before and are going to keep doing it and we’d like to stop them and to get these folk's property back, as well. We are hoping we can get some help identifying these folks," said Chief Houck..

If you can identify either of the suspects, or tell police where to find them, Crime Stoppers of Puget Sound will pay you a cash reward of up to $1,000. Submit anonymous tips through the P3 Tips app on your cell phone, or call 1-800-222-TIPS(8477).