PIERCE COUNTY –  The Pierce County Sheriff’s Department is asking for the public's help to identify the suspect who shot and killed 43-year-old Daniel Stueart aka "Danny Rasher". 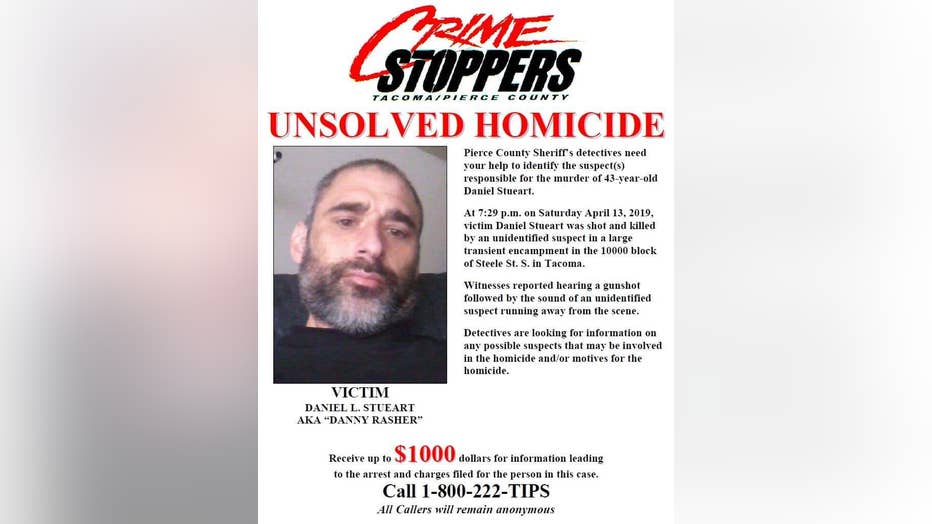 Daniel Stueart's murder remains unsolved. If you know who killed him three years ago on Saturday, April 13, 2019 in an encampment in a wooded area near Charlton Lake in Pierce County, please submit an anonymous tip to Crime Stoppers of Tacoma-Pierce

Photos taken by detectives show the conditions where he was found. It's sad to imagine anyone spending one night there, let alone weeks.

As investigators work to identify his killer, the victim's sister wants you to know that he always had a place to stay with them and that he brought joy to so many.

She said her brother, Danny Stueart, always had a story to tell. "He was so funny. That man had the best sense of humor ever, like seriously." His sister, Kimberly, is determined to make sure the story of Danny's life doesn't end with his murder. "I don`t want anyone to think that he was just like a homeless person who didn`t have any family."

Danny was found shot to death on April 13th in an encampment off Steele St. S. "He wasn`t just some guy that they`re reading and they`re just assuming he was just some guy, because  of where he was murdered at," said Daniel's sister.

Though she's a year younger, Kimberly has always been Danny's protector. "He was a decent person and he was so loyal and he`d do anything for anybody."

His friends were important to him, so was his son, but Danny struggled with addiction. He was good at shielding his family from it. Sometimes he would be gone for a few days, other times longer. "He always had us and he respected us. He always knew that there was a home here for him."

Just a few days before he was shot, Kimberly says Danny told her he was ready to get clean.

William Hinds had been friends with Danny for years and remembers a man who would do anything for you. "I didn`t know he`d fallen on such hard times. To find out he got shot and not know why, or who, it hurts all of us a lot, because he had a lot of people who cared about him," said Hinds.

A couple of weeks after his murder, the county cleared-out the camp while detectives continue to try to identify Danny's killer. "We`re getting tips from the public on the case, but the tips are more about theories and initials and street names and we`re trying to track them down and that hasn`t led to anything at this point, so what we`re looking for is a real name, of a real person who committed this crime," said Pierce County Sheriff’s Det. Ed Troyer.

Danny always had a story to tell, but right now, the story of his life remains unfinished. "The person who did it is still out there and my brother deserves justice, he deserves to be able to be at rest. My family and his friends, we`re never going to get closure until this ends," said Kimberly.

Crime Stoppers is offering a $1,000 reward for information leading to the arrest of whoever killed Daniel. Use the P3 Tips App on your smart phone to anonymously submit the information, or call the hot line at 1-800-222-TIPS (8477).