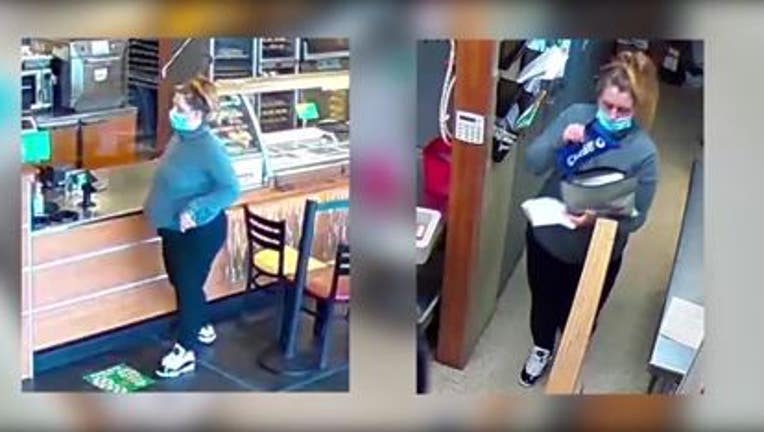 WANTED IN FIFE - It’s one of the boldest, most elaborate robberies Fife Police say they’ve ever seen.

A woman who detectives think is pregnant conned her way into stealing money from a Subway sandwich shop on Pacific Highway E. on January 6th by telling the two workers that she was a corporate manager and needed to take their money because a different store had just been robbed

It was all a lie and even happened while customers were inside to buy sandwiches.

"What she told them was that one of the Federal Way Subways had been robbed and that she had come down, because she needed funds to help get money back into the till to get that business back up and running," said Fife Police Det. Sgt. Tom Thompson. "One of the clerks told her that, ‘Hey, I need to call the store manager to make sure this is okay and she said, ‘Hey, don't worry, I'll call it.’ She then pretends to grab the phone and make a phone call to get this okayed by the manager. Of course, we know that was a fake call. She came behind the counter, she went up to the till, she knew how to operate the till. They also noted that she took cash out of the till drawer, but she didn't take it all, so she left them some money to keep operating, so they thought this might be a legit deal and she sees that the safe is open and she goes over and says, ‘Well, I'm going to need the money out of the safe.’And, she takes the money out of the safe too. It's at that time that one of the clerks kind of starts to feel a little bit odd about this after about, you know, ‘Hey, are we going to count the money? You know, do we have a count on it."

Detectives say the suspect got that vibe too and detectives say she darted for the front door, telling the workers she had a gun and to ‘back off.’

Detectives say the suspect went around the corner of the store and likely drove off in a getaway vehicle.

If you recognize her or her voice that you can hear on the surveillance video, use the P3 Tips app on your smart phone to submit the information to Crime Stoppers of Tacoma-Pierce County.