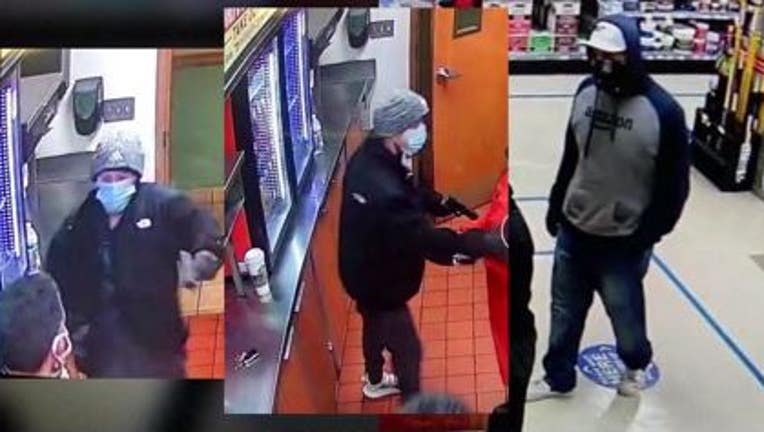 WANTED IN RENTON - The search is on for an armed and dangerous duo who must be pretty desperate, because they've robbed two paint stores and a restaurant so far.

Watch and listen to the surveillance video below from March 8th at about 6:43pm inside the Sherwin Williams store in downtown Renton, as the suspects pretend to be picking out paint before pulling off the heist. They actually pick out some kind of painting product, but then, as the clerk goes to ring them up, the short guy forces a second employee at gunpoint to come to the register, he also corrals a customer who was just shopping in the store. They stole the cash out of the registers and took off.

Four days later, there was another robbery. "On March 12th, we had what looks like to be one of those two same guys come into a restaurant on 108th Ave SE. They walked right in, there were customers in the restaurant. They went around behind the counter, pulled out a gun, robbed the employees of the money in the till, right in front of the customers and left. Since then, we've learned that Kent Police had a robbery at a paint store back on February 18th and it seems from the descriptions, it's probably the same guys that robbed our paint store as well," said Renton Police Cmdr. Dave Leibman.

Renton Police say the taller suspect is white, 25 to 35 years old, 5'10 to 6 feet tall, 200 pounds and wearing a blue/gray hoodie with Amazon on the front and a face mask.

"In all three cases, we had customers in the store, in both the two Renton and the Kent case, they came in, brandished weapons. They didn't care if there were witnesses. They just did their behavior and left. That's unusual behavior and we are worried about that," said Cmdr. Leibman.

If you can identify either suspect, Crime Stoppers of Puget Sound will pay you a cash reward of up to $1,000 and you will remain anonymous. Use the P3 Tips app on your smart phone that you can download for free, or call the hot line at 1-800-222-TIPS(8477).