CASE UPDATE May 7, 2021 - There is new information in the ongoing search for the four suspects who shot a 2-year-old little girl in the face at 23rd Ave. S. and S. Jackson St. in Seattle's Central District on Sunday, April 11th.

Listen to the video above to hear the barrage of gunshots.

Another witness heard the shots and took cell phone video showing the gunmen running from the scene. Detectives describe them all as young black men. One of the suspects was wearing a blue throwback Mariners sweatshirt.

They got into an SUV and took off. "We've recovered that pewter-colored Tahoe that was involved in the shooting. It was a stolen vehicle. That's been recovered. Detectives are getting evidence from that as we speak," said Ret. Sgt. Jim Fuda with Crime Stoppers of Puget Sound.

If you know the names of any of the suspects, you will remain anonymous when you submit a tip to Crime Stoppers of Puget Sound. You will never be asked to give your name and you will be paid a cash reward of up to $1,000 per suspect that you help identify. You can text the info through the P3 Tips app on your cell phone, or call 1-800-222-TIPS(8477). 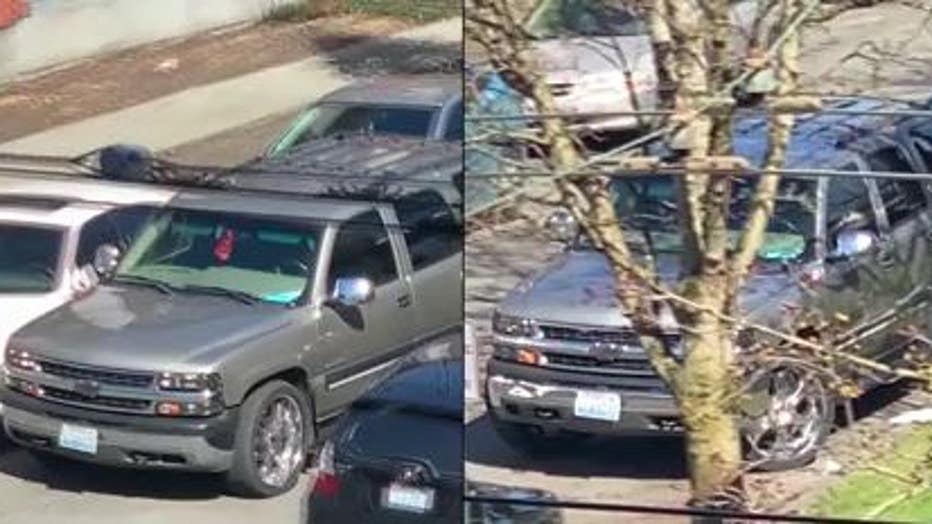 -----ORIGINAL STORY-----
FUGITIVES WANTED IN SEATTLE April 16, 2021 --
The search is on for four suspects who Seattle Police detectives say opened fire last weekend near Judkins Park in the city’s central district, shooting a 2-year-old girl in the face and three men.

Watch and listen to the video below from the scene at 23rd Ave. S. and S. Jackson St. last Sunday afternoon, April 11th.

All four victims survived. The little girl was released from the hospital earlier this week. Truly amazing when you listen to the barrage of gunfire that was recorded on a cell phone. We are only using the audio to protect the identify of the witness but it gives you an idea of how terrifying this was.

"Suspects park behind an Auto Zone at 23rd and Jackson, run around the side of the building, stand above a little walkway and fire more than 30 rounds into the parking lot, striking these four people,’ said Ret. Sgt. Jim Fuda with Crime Stoppers of Puget Sound.

Another witness heard the shots and took cell phone video showing the gunmen running from the scene.

They got into a 2001 Pewter color Chevy Tahoe with Washington license plate BFX9017 that was reported stolen out of Renton.

Detectives are asking for your help to find that Tahoe and to identify the suspects. Two got into the front seat of the Tahoe and the video shows the other two getting into the back of the vehicle before it sped away.

Detectives don't have a motive yet.

"If anybody in that area has any footage, you can download the P3 Tips app and submit that to us anonymously, so we have it and let's help solve this case," said Ret. Sgt. Fuda.

If you know where Seattle Police can find that vehicle, or if you can identify the suspects, Crime Stoppers will pay you a cash reward of up to $1,000 and you will remain anonymous.