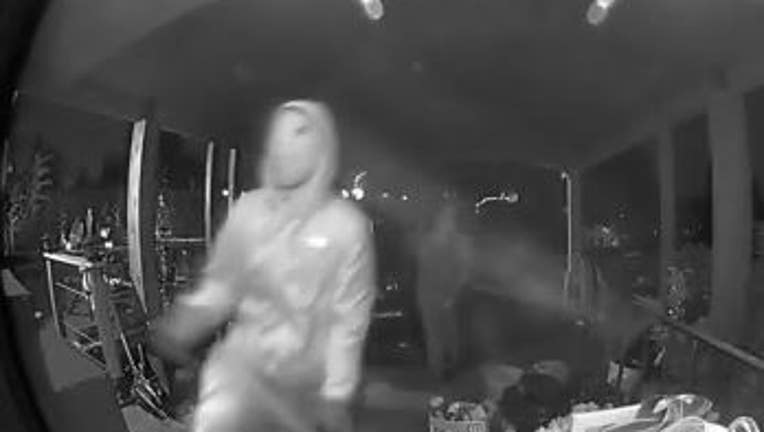 WANTED IN KING COUNTY - King County Sheriff’s detectives are hoping you can help identify a group of armed suspects who were caught on surveillance camera attempting a home invasion robbery.

A Ring camera shows a tall guy leave the carport, you see two others still there with pistols. A suspect with a gun in his left hand approaches the door as the other one stays back.

And, if you look closely out beyond the carport,  you can see another suspect standing watch.

Listen to the audio in the video above, so you can hear the voice of the suspect trying to get the owner to open the door, until they realize they are being recorded.

Fortunately, they did not succeed in getting inside, but detectives are hoping somebody recognizes the gunman's voice, or can help identify any of these ‘armed and dangerous’ suspects before they try it again.

"Skyway is a vibrant, just great community and we know that we are better than this and certainly the conduct of these men is very, very concerning. We desperately need to get these folks into custody. We know if they are doing this, they are doing other criminal activity in Skyway and beyond," said King County Sheriff’s Sgt. Tim Meyer.

So, if you hear any chatter on the street about a group trying to commit home invasion robberies in Skyway or anywhere in south King County, or if you can provide any information at all to help identify the suspects, Crime Stoppers of Puget Sound will pay you a cash reward of up to $1,000.

Detectives say the victims are just normal people and there's no reason at all for them to have been targeted.

Your tip will always remain anonymous.