WANTED IN SEATTLE --
Has this woman been working in your yard lately?

She's got a $500 leaf blower strapped to her back in this surveillance photo from an apartment building in Seattle's Wallingford neighborhood -- not because she's working with it -- but because she's stealing it.

Now, detectives are hoping you can help identify her.

"She takes a crowbar, we feel, and actually forced her way into the building. In the video the first thing you're going to see is her coming in the building and you're going to get a really good look. So, she comes in, what you don't see is she disappears in a stairwell. Now, she gets into an enclosed kind of storage area. One of the next shots you're going to see is her coming out and now she's trying to disguise herself, she's pulled her hoodie up. She's wearing the leaf blower and next thing you see her going out the door,” says Ret. Det. Myrle Carner with Crime Stoppers of Puget Sound. “She taped over what she thought was a security camera. Well, Voila! It’s just an air freshener. She thought she was secure. You're probably watching the show yourself. Turn yourself in, better yet, if you know who it is, you turn her in and we're going to give you some money.”

She’s white and wore a gray hoodie with a bright green Adidas logo on the front. 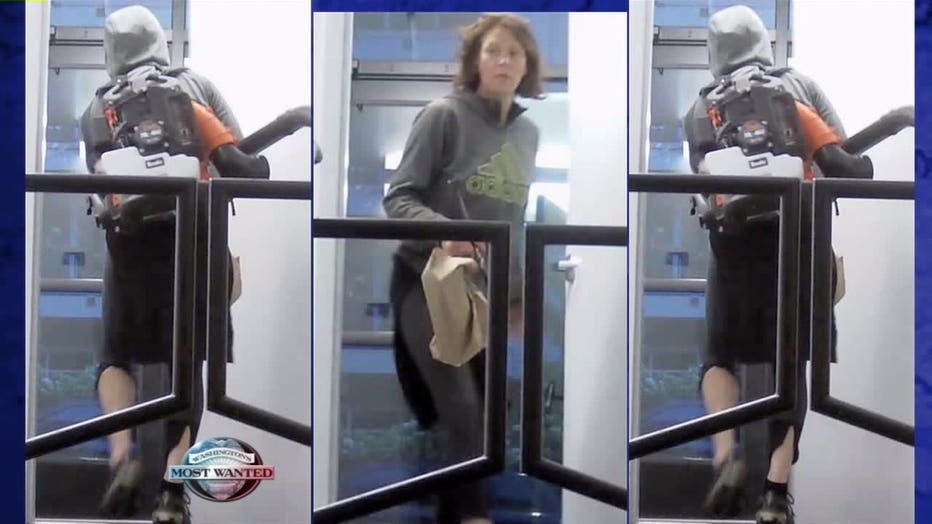