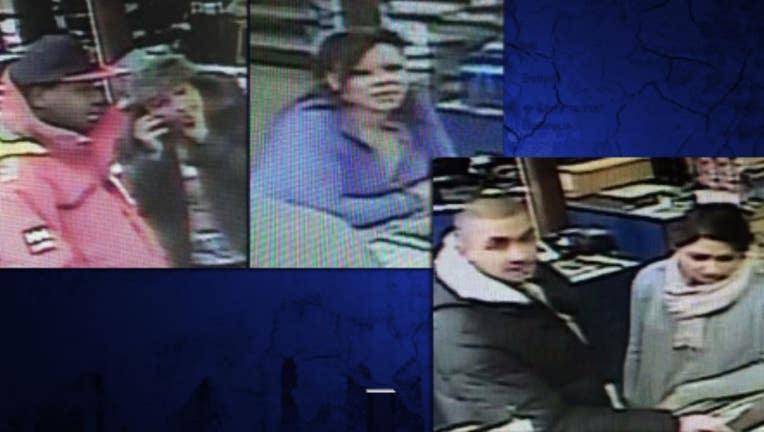 WANTED IN LAKEWOOD -- Last week, Q13 FOX News reported on a camera store that was ripped off for thousands of dollars in merchandise. It turns out Robi’s Camera Center in Lakewood was hit by thieves again while the news crew was there. "We actually noticed the camera missing during a one on one just like this, when I looked down to demonstrate what kind of cameras we had in the cabinet, and one was gone," said Tod Wolf, who  is the operation manager of Robi’s. While Wolf was telling us about a pair of thieves who stole cameras just 24 hours before, a man and woman seen very clearly on their surveillance video were lifting their own camera. “Three folks came in, one misdirected a salesperson, and two people worked together at the counter,” Wolf said. He says there were bold, calm and lucky. “When he notices the salesman is looking the other way, the gentleman reaches behind the counter and slides one of the sliding doors open. They are almost always locked, unless were standing there and this salesman had just standing there,” Wolf said.

Camera store robbed twice in as many days

Wolf is still banged up from the thieves who stole from him the day before. He chased them out of his store, and stuck his hand through their back passenger window to try and grab the stolen cameras. "They last caught me broadside in my arm, and my arm ended up inside a broken out plastic window, and by the time we got up to 25 or 30 miles an hour I was thrown to the pavement,” Wolf said. They got away driving a peach or cream colored Camry-style car with two back windows covered in plastic. Wolf hopes that someone will recognize that car, and has a warning for those who might be looking for a deal on Craigslist. “Most of the arrests have not been from ID opportunities like we're getting on the news, most of the arrest have been from shopping on Craigslist,” Wolf says. “If there's an item for sale on Craigslist that's too good to be true, there is no owner’s manual, there is not the right cord, there's no spare battery, it's stolen." The camera store has had over 7,000 views on Facebook and hundreds of shares. They’ve also posted the bad guy’s pictures on their business sign right in front of their store hoping that someone will recognize these people and turn them in. If you know who any of them are, call an anonymous tip into: CRIME STOPPERS: 1-800-222-TIPS You must call the Crime Stoppers hotline with your tip to be eligible to receive a cash reward for information leading to a fugitive’s arrest. CLICK HERE for information on how to TEXT A TIP to Crime Stoppers.