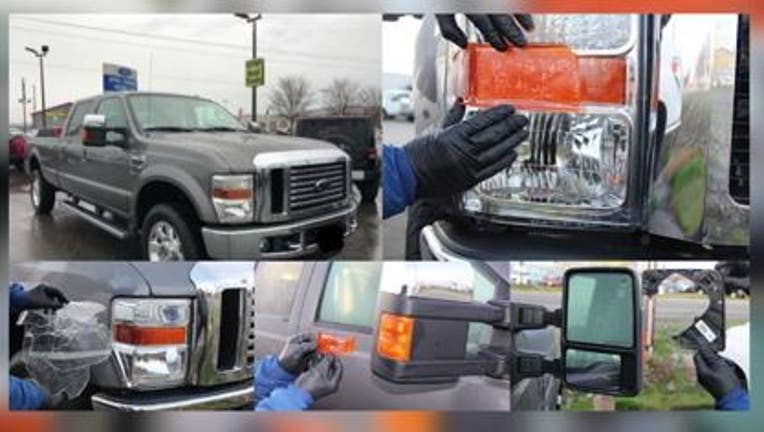 SKAGIT COUNTY - The family of Tonya Pearson-Yoder and Washington State troopers are asking for your help to find the 2008 to 2010 dark-colored Ford Super Duty F-250, F-350 or F-450 that hit and killed the 53-year-old mother one year ago.

The truck pictured is not the actual suspect vehicle.

Tonya was crossing I-5 to get back to her vehicle after speaking to her boyfriend who was parked at the Bow Hill Rest area in Skagit County on November 20th, 2019, when Tonya was hit by a Ford Super Duty and then by a Semi. The Ford truck driver kept on going. The semi driver stopped and called 911.

Troopers recovered multiple pieces of the pickup truck left at the scene. "We have a lighting fixture from the passenger headlight and we have pieces from a passenger side mirror. What that shows our investigators is that Tonya was standing at the time she was originally hit, by what we believe is a Super Duty F-250, 350 or 450. We don't know if that's a single cab, an extended cab, or a quad cab," said Trooper Heather Axtman.

Detectives believe the Ford truck is dark in color and could have damage to the right front fender. They've scoured local body shops and auto dealers looking for the vehicle. “What we do know is that the damage is significant enough that they had to fix it. Somebody knows something,” said Trooper Axtman.

“I am angry and I am obsessed. I will absolutely find the avenue for that one lead that brings this person to justice,” professed Tonya’s younger sister, Danyel Davis. "I've always said that Tonya had the purest heart."

So, please think back to a year ago and try to recall whether you saw a damaged dark-colored Ford Super Duty in your neighborhood, worked on it, or know who drives one that had that kind of damage last November or December.