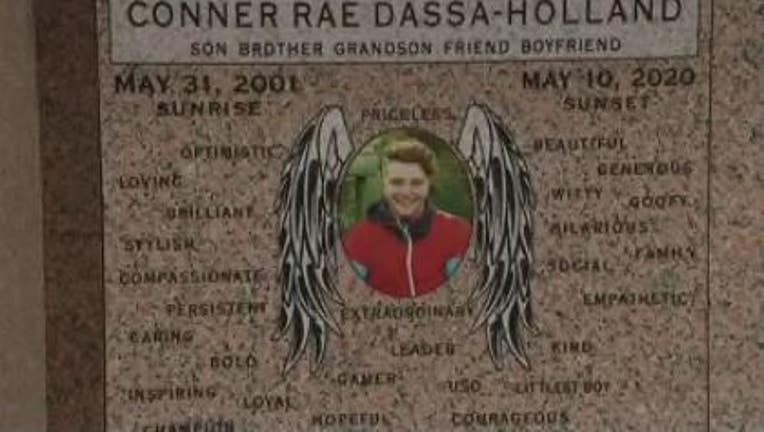 WANTED IN SEATTLE - Monday will mark one year since an 18-year-old young man full of promise was gunned down in his car right in front of his home.

You may recall his mom's tearful news conference outside her house in the Rainier Beach neighborhood of Seattle. "The person who did this to my boy, they needed a hug, they needed more love, they couldn’t have done this if they had those things in their life," said Alicia Dassa.

Now, as the holiday approaches, Alicia is frustrated his case remains unsolved and is working with Seattle Police to help other families of murdered children. "People assume or they think that it’s been solved. People think that the person is in jail and they’re not," said Alicia.

The marker for Conner was just put in place at Greenwood Memorial Park in Renton this week, days before the anniversary of his murder. Alicia says they chose the words they loved the most about her son: ‘Uso’ from his friends and ‘littlest boy’ from his grandpa.

Conner spent the last day of his life with his family. Not long after they got home, his mom asked him to move their car to in front of their house. He drove around the block and as he turned from S. Fletcher St. onto 51st Ave. S., someone in a vehicle started shooting.

Surveillance video from a nearby home shows the suspect's vehicle speeding down the hill past another car before it turns left. "What we need is that vehicle and who was in that vehicle," said Ret. Sgt. Jim Fuda with Crime Stoppers of Puget Sound.

Seattle Police say they have followed up on every tip, every social media rumor and all of the physical evidence recovered, but nothing has identified the killer. "They’re at a stalemate right now and look forward to that piece of information to either prove or disprove who might have done this to Conner," said Ret. Sgt. Fuda.

As she waits for a break in the case, Alicia has been meeting Seattle Police to try to address the senseless violence that took her son's life and many others in the last year. "We need people to step up. Chief Diaz told us there’s 110 shootings so far in 2021, but there’s not 110 shooters and that’s something that stuck with me, because the people that are doing this are empowered and emboldened and keep doing it and who’s to say they’re not going to knock on your door next," said Alicia.

As she grapples with the constant anxiety of not knowing who shot her son, or why, she's planning to be back here with her family on Monday - one year to the day he was murdered.

If you know who shot and killed Conner, Crime Stoppers of Puget Sound and his family will pay you a $3.700 cash reward. You will remain anonymous. You can submit tips anonymously through the P3 Tips app on your cell phone, or call 1-800-222-TIPS(8477).