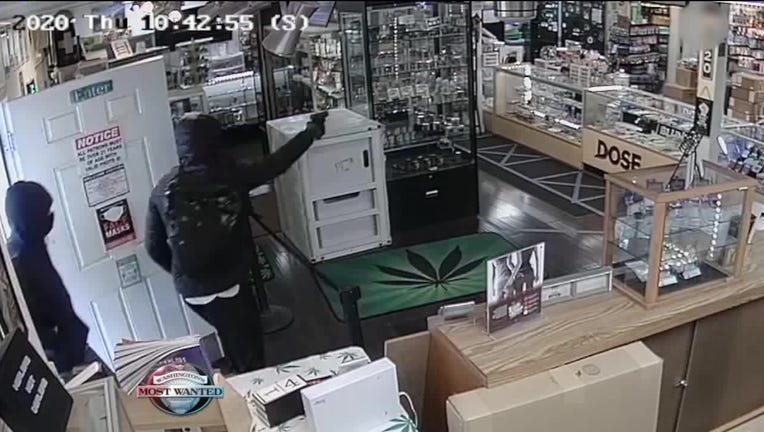 CAPTURE UPDATE September 29, 2020 - The Snohomish County Sheriff's Office says a 19-year-old Des Moines man and a 19-year-old Seattle man have been arrested for two counts of 1st Degree Robbery with a Firearm. Detectives say the two suspects were involved in the February 6th and February 15th robberies at MarijuanaClub99 on Highway 99 and Gibson Rd.

During both robberies, the suspects entered the store wearing hoodies and masks and demanded money from the cashier. The suspects also filled black trash bags with display items in the shop before fleeing from the scenes.

In the analysis of the evidence, detectives say the two suspects are also involved in the September 17th MarijuanaClub99 robbery and the September 25th High Society marijuana shop robbery in Everett, as well as several additional robberies that have occurred in Snohomish County.

The sheriff's office says on Monday around 3pm, the Snohomish County Violent Offender Task Force took both suspects into custody near a residence in Seattle. The 19-year-old Seattle man fled from deputies on foot, but was captured shortly after. Both suspects were transported and booked into Snohomish County Jail for two counts of 1st Degree Robbery.

Bail was set Tuesday at the Snohomish County Superior Court for both suspects:

Detectives say they anticipate additional charges for both suspects.

If you recognize any suspects in the video, or know anything at all that can help identify them, use the P3 Tips app on your smart phone that you can download for free to submit the information. You can also upload photos through the app, or call the hot line at 1-800-222-TIPS(8477).

----ORIGINAL CASE September 25, 2020----
After we featured surveillance video last February showing a pot shop worker using bear spray to thwart would-be robbers, you'd think word would travel for crooks to steer clear of the store in Everett. But, it didn't travel far enough, because now the same business is reeling from another bold heist last week.

Surveillance video shows four suspects barge into MarijuanaClub99 on Highway 99 and Gibson Rd. just before 10:45am on September 17th. The worker saw them coming and went to the back of the store to hide. The first suspect that came in had a handgun pointed towards where the worker had just been. He and a second suspect in a gray hoodie went to a display of products and brought it crashing down to the ground.

The third and fourth suspects went straight to where the weed is and shoveled it into bags to steal.

You can see in the video that the fourth suspect in the blue-colored hoodie and gray sweatpants is tall and lanky.

The four suspects were in-and-out in less than a minute. "We have somebody that watches from their cell phone, so we set the alarm off immediately, which made them not stay as long. If anybody can help us catch these guys, it'd be a blessing. It's very upsetting that this keeps happening to us. We're a family-run place. We don't have investors and it's just very upsetting that it keeps happening and we just want to get them caught,” said store owner Ryan Johnson-Watkins.

Snohomish County Sheriff's deputies say the four suspects got away in a black vehicle.

If you recognize anything about them, or know anything at all that can help identify them, use the P3 Tips app on your smart phone that you can download for free to submit the information. You can also upload photos through the app, or call the hot line at 1-800-222-TIPS(8477). It's anonymous and you'll get a cash reward of up to $1,000 for each of the four suspects that you can help get identified and arrested.