SEATTLE -- Investigators will return to a Pierce County home, searching for clues in the disappearance of missing Utah mother, Susan Cox Powell. An attorney for her family says they plan to search the former home of her father-in-law, Steven Powell. The convicted sex offender no longer owns the home. He was forced to give it up as part of a settlement on voyeurism charges. Susan's family wants cadaver dogs to comb the property, and a more thorough search of Steven Powell's belongings. Author Rebecca Morris claims Powell knows exactly what happened to his missing daughter in-law. It's one of many bomb-shells in the new book she co-authored, ‘If I Can’t Have You’. She says, there were warning signs about his son, Josh Powell, early on. As a teenager, he threatened his mother with a knife, and tried to hang himself. And, after his wife Susan went missing, she says police repeatedly dropped the ball, and eventually Powell ended up killing his two young sons. Morris says as early as 2007, more than two years before Susan went missing, her husband josh had daydreams about Susan dying. "Josh had said that he fantasized that someone knocked on the door and said your wife's been killed in a car accident." Morris got into the mind of Josh's father, Steven, by gaining access to his diary. "I think Steve Powell knows what happened to Susan, why it happened, and where she is." After working on the case for three years, Morris still isn't sure if what happened to Susan was an accident or calculated murder. "He may have sedated or even poisoned Susan on that Sunday, but it also may have been a random struggle between them and she bled and he decided this was an opportunity to get rid of her." Friends say Susan wasn't feeling well leading up to the disappearance. Morris writes that Josh never cooked, but he did on that day, making pancakes. Bringing Susan hers on a special plate. “He could have alerted her pancakes and toppings with something." Susan let it be known in a personal video she made, she could be in danger. “This is me, July 29th, 2008. Covering all my bases, assets are documented." Morris says she was beginning to put some money aside and making a last will, so people would know if something happened to her, it wasn't an accident. "Josh threatened her and said, ‘Murder-suicide on his mind then." So what went so wrong with the investigation into Susan's disappearance? A case that ultimately ended with Josh killing his sons and lighting his Graham house on fire in February of 2012, Morris says a small town police department in Utah, was in over its head. "Well, we know now that West Valley City police determined this was a crime scene and that Susan had been harmed or murdered. They didn't let on for a few years about that." Morris says, "I think this is going to be a mystery for some time, because we don't know what happened. We don't know where Susan is. And, the only person who knows is Steve and Steve wouldn't barter when he was in prison." Secrets she believes Steven Powell will take to his grave. You can meet Rebecca Morris and her co-author Gregg Olsen Friday, May 30th at the Puyallup Public Library at 7pm. Tickets are free. Susan's parents, Chuck and Judy Cox, along with attorney Anne Bremner will all be there for a panel discussion. 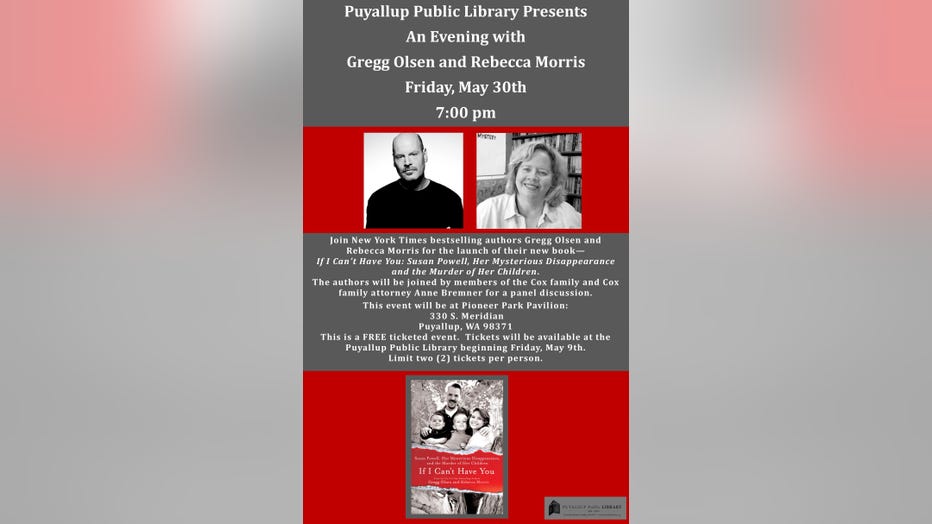