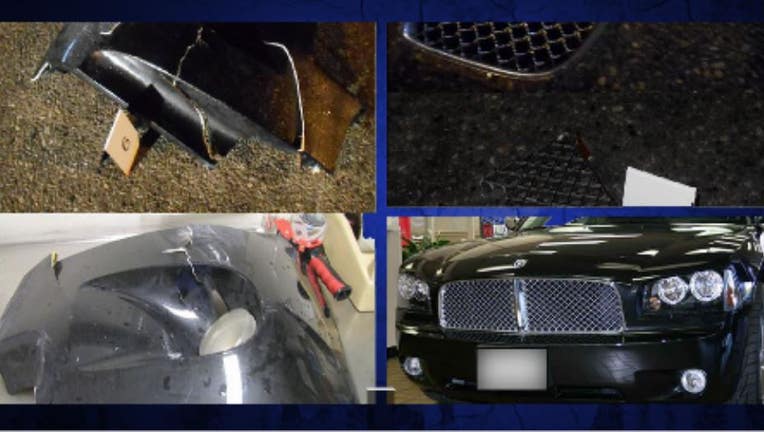 EDMONDS -- Four good Samaritans rushed to help the victim of a hit-and-run in Edmonds. Viora Mayobo was rushed to Harborview Sunday night after she was struck on Highway 99. Her condition was listed as serious Monday afternoon. “I couldn`t believe that was my mom laying there, her face is bruised, the gash that I saw last night on her head -- they closed it up, it looked so bad,” Viora's daughter, Esther Mayobo, said. The driver who hit Mayobo never stopped to help. “They didn`t slow down or try to see what was going on. Obviously, they know they hit something, even if you couldn`t see,” Esther Mayobo said.

She said Sunday night’s fog and freeze prompted her mom to turn on the hazard lights of their 1998 Toyota Camry and stop in the middle of the turn lanes on Highway 99 in Edmonds. “We couldn`t see anything next to us or in front of us. She said, 'No it’s not safe,'” Esther said. The 49-year-old mom got out of her car to wipe the windshield, but as soon as Viora reached in from the driver’s side to grab some napkins, a car hit her. “It was maybe five seconds; I was getting the napkins, that`s how fast it was. I just heard boom, the whole car went back,” Esther said. “I open the door and I ran out and I said, 'Mom, where are you?' Started running and freaking out, I saw her laying on the floor and ran over there I was crying and she wasn`t responding,” Esther said. On top of the large cut to her head, Viora is now in ICU with a broken jaw, pelvis and leg. “If she felt that was a safe place (to stop on the highway), obviously this is a horrible lesson to have to learn,” Edmonds Police spokesman Josh McClure said of Viora Mayobo. Edmonds police hope the damage left behind at the scene will help to identify the car involved in the accident. “We believe it`s a mid-2000 Dodge,” McClure said. Edmonds Police say it's a 2006 to 2010 black Dodge Charger. The car will likely have damage to the driver side front fender, the grill and the head light or fog light. Those parts were left at the scene after they broke off from the powerful impact. Esther says she’s shaken but knows she has to stay strong for the only parent she has. “We’ve been through so much together she is the only person I’ve got,” she said. Esther is determined to get past these hard times. She said her mom squeezed her hand on Monday. It’s a small step in a long recovery.