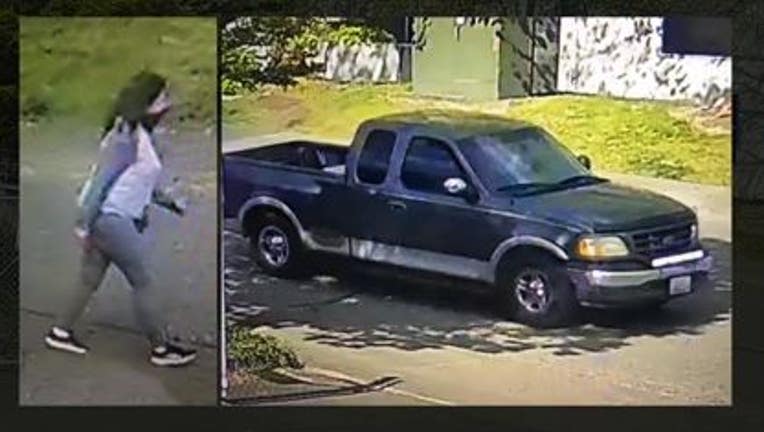 The Puget Sound Auto Theft Task Force says more than 20 of them have been stolen in the last week in south King County and Pierce County.

One of the theft victims, a business owner in Auburn, is hoping somebody can identify the suspects who stole his Ford F350 and trailer full of tools.

The task force says the woman shows above is a person of interest in the theft on the afternoon of April 22nd. She was seen scoping out Commercial Crating and Box Packaging on R St. NW in Auburn. A short time after she left, a pickup truck drove slowly past the business. It returned and stopped in front of Bill Johnson's truck and trailer. A couple of minutes later, a thief drove off with his vehicles and then the truck followed along behind him.

"They got all my tools that we'd normally use in our operation and also on site. Makes it kind of difficult to recoup. We lost a little time and effort to get more tools and do what we do here at Commercial Crating," said Johnson.

Johnson says his truck and trailer were found on Wednesday, April 28th, but all of his tools were gone and the door locks on both vehicles were busted and have to be replaced, along with his ignition switch.

He's now working on beefing-up the security at his business with surveillance cameras and fences.

If you can identify the woman, or tell detectives where to find the suspect's truck, please submit an anonymous tip to Crime Stoppers through the P3 Tips app on your cell phone, or call 1-800-222-TIPS(8477).