WANTED IN PIERCE COUNTY —
Pierce County Sheriff`s detectives need your help to identify the suspect who used a knife during a robbery at a marijuana dispensary on Key Peninsula Highway North in Lakebay.

The suspect entered KP Medicinals armed with a knife and a roofers-style hammer on Sept. 22nd. He held the knife to an employee and stole cash from the register.

“There aren’t a lot of those marijuana dispensaries out there, but this one became a victim of this subject who went in and prepared to do some damage or hurt somebody if he didn’t get what he wanted,” said Pierce County Det. Ed Troyer.

The suspect fled the business on foot heading south.

Detectives describe him as white, approximately 5`7′ to 5`8′ tall, with a medium build and a raspy voice.  The suspect was seen wearing green digital camouflage pants, a dark blue hoodie, a black ski mask, bright blue latex gloves, and bright blue tennis shoes with neon green soles. “By looking at how much this guy disguised himself, somebody would probably know who he was if they saw him. The fact that he had a hatchet and a full costume and a full cover up to go in there makes us believe he probably knows the area, is from that area,” said Det. Troyer.

The suspect was carrying a digital camouflage backpack.

“We’re not going to be able to determine who this is unless we get a tip from the public. We’re hoping we can get some information so we can get him taken off the streets,” added Det. Troyer.

Crime Stoppers of Tacoma/Pierce County is offering a cash reward of up to $1,000 for information leading to an arrest. Call 1-800-222-TIPS or go to www.tpcrimestoppers.com to submit the information anonymously.

This case will be featured on Washington’s Most Wanted Friday night at 11pm on Q13 FOX. 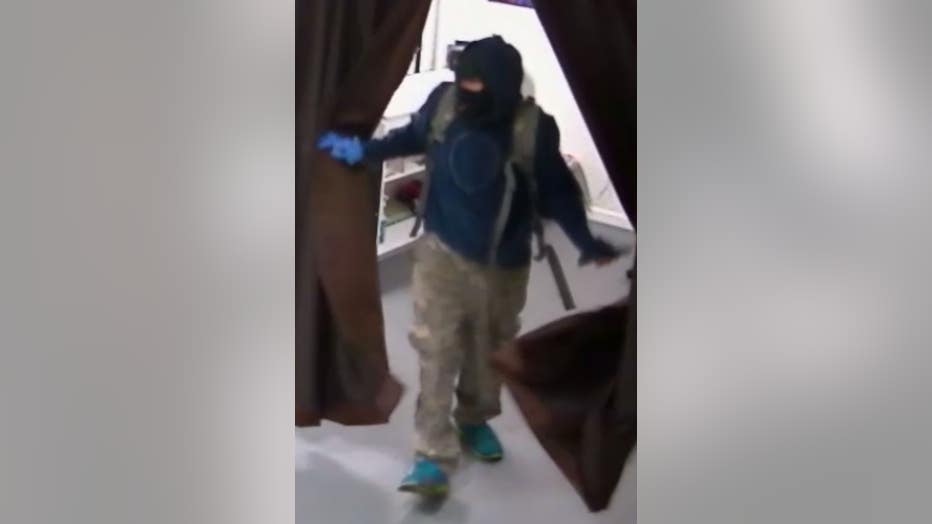