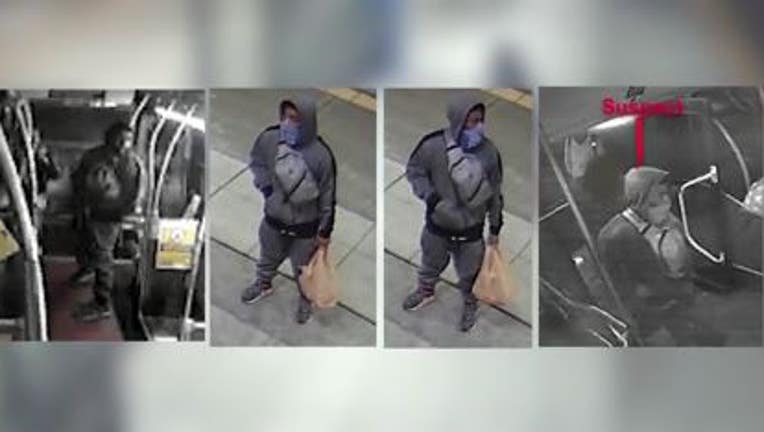 WANTED IN KING COUNTY - King County Sheriff's detectives  are asking for the public's help to identify this violent suspect who stabbed a stranger on the bus in SeaTac multiple times at about 5:20am on Thanksgiving morning.

The victim almost died from a severed artery. He was rushed  to Harborview Medical Center. "If it were not for the life-saving efforts of a good Samaritan on the bus and one of our deputies in SeaTac who applied a tourniquet to stop the bleeding, he would have lost his life," said King County Sheriff’s Sgt. Tim Meyer. The victim has since been released from the hospital.

Detectives obtained surveillance showing the suspect traveling from the Federal Way Transit Center to the Tukwila Transit Center. The unprovoked attacked occurred as he was riding the bus back south along International Blvd towards SeaTac.

"Our victim in this case is a vulnerable adult who was most likely in some kind of behavioral health crisis and he, in this unprovoked attack, is stabbed multiple times," said Sgt. Tim Meyer.

The suspect was wearing a grey bicycle messenger bag on the front of his chest. "We know he’s out there. We know he’s someone who uses transit and that bag, I think is going to be a tell-tale sign of who he may be," said Sgt. Meyer.

The suspect also had a a plastic bag from Safeway with him and his shoes had pink Nike logos on them.

"The timing and just the brutality of this attack is very disturbing. Thanksgiving on a Metro coach should be one of our safest times. We want to keep the community safe and just ask viewers to please look for this man," said Sgt. Meyer.

If you can identify the suspect or have any information on where deputies can find him, please submit an anonymous tip right  now to Crime Stoppers of Puget Sound  by calling 1-800-222-TIPS(8477) or you can text his name plus any photos you have of  him through the P3 Tips App on your cell phone.  It's always anonymous. Crime Stoppers of Puget Sound is  offering a cash reward of up to $1,000 for information that leads to the arrest  of the suspect.