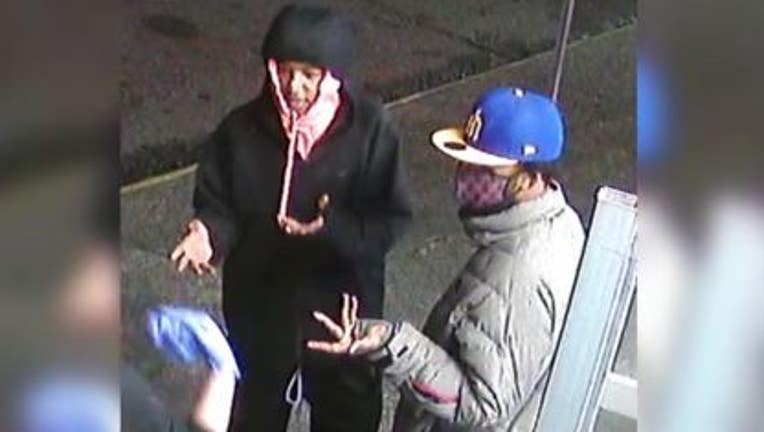 WANTED IN SEATTLE - Seattle Police Robbery Detectives are asking for the public’s help to identify two suspects in a violent armed robbery at a Magnolia convenience store.

The suspect in the Mariners hat pistol-whipped a female store clerk. She suffered multiple, significant lacerations and had to be taken to the hospital.

They  entered the store around 6:15pm on Sunday, December 6th and got into a verbal altercation with an employee who asked them to leave. The suspects left the store, but returned a short time later. The suspect in the Mariners hat pointed a black handgun at the victim and demanded the cash from the register and her purse.

"The robbery is over. There’s nothing else to do except leave. Oh no. Suspect number one in the Mariners hat takes his weapon and pistol whips this victim, almost unconscious. It was amazing how much blood was everywhere and he just beats her for no reason. Then, he leaves," said. Ret. Det. Myrle Carner with Crime Stoppers of Puget Sound.

They are offering a cash reward of up to $1,000 if you can identify either suspect.

Listen to how heartless they were after the attack. "A witness was contacted down the street and said that she saw him and this other guy walking and the one that actually did the pistol whipping is laughing and looking back over his shoulder, like, ‘Look what I just did,’" said Ret. Det. Carner.

Detectives say both suspects are black and 18 to 20 years old.

The gunman is 5'10 to 6 feet tall, with a medium build, gray puffy jacket, Seattle Mariners blue baseball cap with yellow on the brim and armed with a black handgun.

The second suspect is 6 feet tall and thin, with a red face mask.

If you can identify either of them, please call 1-800-222-TIPS(8477) or text a tip through the P3 Tips app on your cell phone. It is anonymous. You will be paid the cash reward of up to $1,000 for any information that helps police catch these criminals.