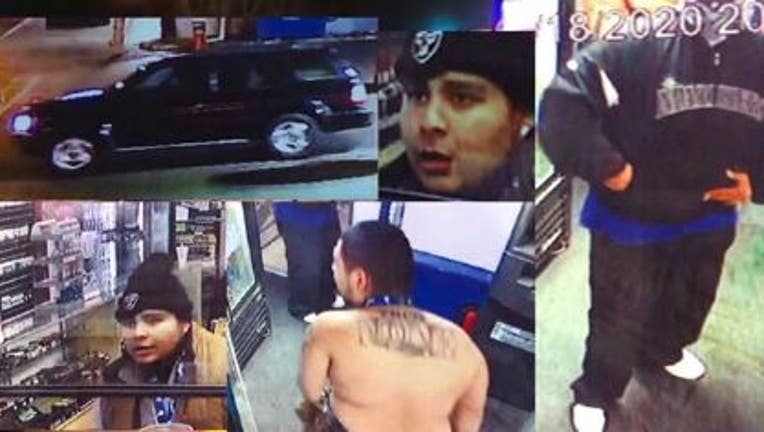 WANTED IN DES MOINES - What began as a theft case quickly escalated into an assault and a drive-by shooting at a smoke shop in Des Moines and detectives are hoping you can identify the two suspects.

Des Moines Police say it started when the store owner confronted a suspect for shoplifting on November 18th. The second time he’d seen the same guy, a struggle ensued and the suspect’s shirt was pulled off. He left the store on Pacific Highway S. to go get his buddies. An outside camera showed he was with three other men. He told them what happened and then they all headed back towards the door. The suspect came in and pointed a handgun at the owner, racking the slide and said something like, ‘Oh! You’re scared now!’ The camera got a good look at him and when he turned you could see he has a distinctive tattoo on his upper  back and left shoulder.

Detectives say a second suspect who wore a Mariners jacket followed the main suspect inside the store and also threatened the owner with his hand in his pocket, kind of gesturing like he had a gun, but none was seen.

The two suspects left and they all got into a dark-colored Nissan Pathfinder.

As they drove off north on Pacific Highway South, the surveillance video shows the vehicle’s passenger door open and then the muzzle flashes as they fire multiple rounds into the business and the vehicles in the parking lot.

Fortunately, nobody was hit, but their reckless behavior has detectives very concerned for everyone’s safety, so if you know who the guy is with his shirt ripped off, or you can identify the other suspect, Crime Stoppers of Puget Sound will pay you a cash reward of up to $1,000. You can text the information and any photos through the P3 Tips app on your cell phone or call 1-800-222-TIPS(8477). It’s anonymous. You will never be asked to give your name.