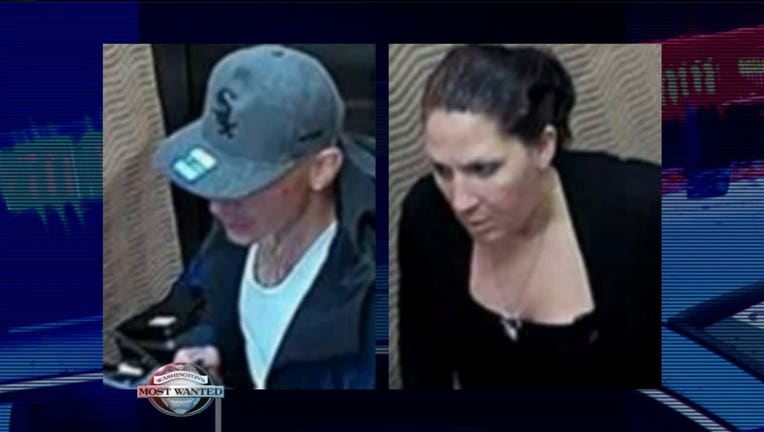 WANTED IN WOODINVILLE - King County Sheriff's detectives need your help identifying a man and woman suspected of burglarizing a storage facility in June.
"These two took advantage of the new 'no contact' way to sign up for a storage unit, because of COVID restrictions and they used a fraudulent credit card to rent a storage unit at a location in Woodinville. They used their code to get in past the gate, because now they're officially signed up to an official unit and instead of actually going to store items, they broke into multiple storage units belonging to other people, stealing items from their units," said King County Sgt. Ryan Abbott.

One of the burglarized units belonged to Jon Wardwell.
He's a drummer whose band had taken a break for awhile, but his hope of a reunion got crushed after the burglars stole his entire drum kit. Surveillance video shows all of his drums in their black cases on the cart as the crooks ride the elevator to the lobby with their loot -- and a part of Jon's livlihood. "I've got a snare drum that they don't make anymore. My head's just spinning around from the whole thing, it's so maddening. I'd love to get them caught and run them through the ringer some more, you know, I can't believe people do this," said Wardwell.
The guy wore a gray Chicago White Sox hat with the manufacturing sticker still on the bill and has tattoos on his neck and chest.
The woman carried a large burgandy-colored purse.
Detectives say they also stole a ton of tools, motorcycle helmets and gear along with multiple other items.
"They don't do a very good job of covering up their faces. There are some great cameras at the storage unit that was able to capture their photos and their video of them walking around. So we're hoping that somebody that sees this recognizes them and provides us that information," said Sgt. Abbott.
If you know their names, get the cash reward being offered by Crime Stoppers of Puget Sound. Use the P3 Tips app on your smart phone to submit the information, or call the hot line at 1-800-222-TIPS(8477).
It is anonymous.