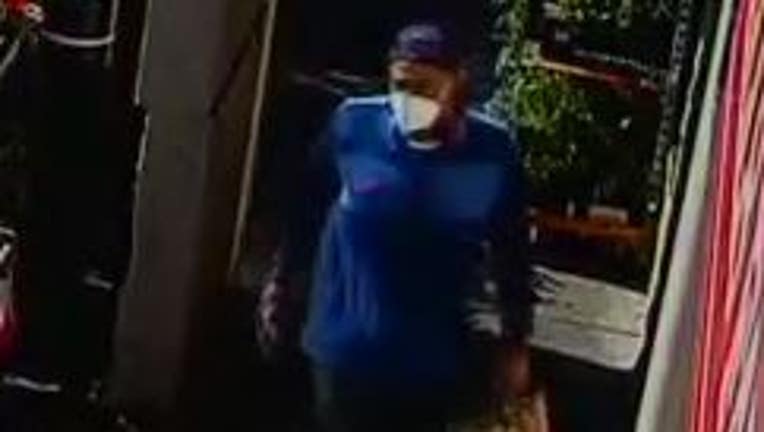 WANTED IN SEATTLE - Tense moments for some grocery store workers in Seattle after witnesses say a man accused of shoplifting pulled out a knife after a worker tried to ask for their merchandise back.

Surveillance video shows the suspect walking into the Red Apple Market in the Beacon Hill area on the morning of May 14th with a bag. He grabbed a cart and headed to the deli area. Police say he took several pre-made sandwiches, along with some other items and then blew right past the cash registers and walked out the door without paying. As he exits the building, you see him looking back over his shoulder. Then, about 30 seconds later a bunch of employees follow him out to the other side of the parking lot. "This gentleman actually pulled the knife from his pocket. It was a folding knife. Opened it. Held it in his hand and threatened, with an expletive, that ‘I'm going to hurt you.’ So, here's a guy that turns a simple shoplift by simply all he had to do was give up the items and they would have let him run on his way, he turns it into a robbery with a knife," said Ret. Sgt. Jim Fuda with Crime Stoppers of Puget Sound.

Police say he ran to the light rail station across the street and store employees lost sight of him after he got on an elevator.

He was wearing a navy blue jacket and neon orange and gray shoes.

Seattle Police say he's believed to be in his 40s, with a medium build.

If you know recognize him, you can submit an anonymous tip to Crime Stoppers of Puget Sound by calling 1-800-222-TIPS(8477), or by using the P3 Tips app on your smart phone that you can download for free. It’s anonymous and you will be paid a cash reward of up to $1,000 if the information leads to his identity.