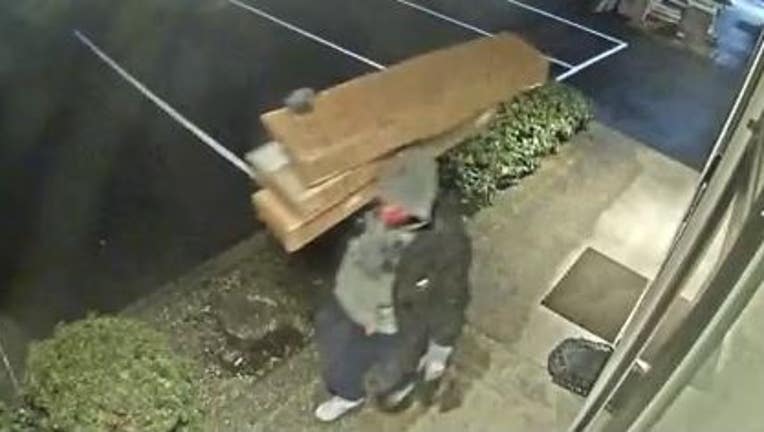 WANTED IN KIRKLAND - Detectives are hoping surveillance video showing a burglar stealing guns from a business in Kirkland will help someone identify the suspect.

The video shows the man carrying several long boxes on his shoulder as he left Optimum Performance Motor Sports in the Totem Lake area. Detectives say inside those boxes are firearms.

Detectives say he broke in around 4:40am on Easter Sunday, April 4th.

"The owner is a business owner of a motorbike parts and accessory store and he also holds a Federal Firearms license, which means that he's able to legally transfer ownership of firearms for private citizens and people as such. So, ultimately, we believe that the suspect may have known this, may have known that there were firearms inside the building at that time that were being stored and locked away in the back room and that suspect was able to come in. That's all he really took. That's all he was really looking for. It appears, by the video, he didn't take any other of the electronics, or any of the motorbike parts and pieces, or anything like that. He was solely intent on stealing the firearms. The shop owner did everything he was supposed to do. The firearms were locked and secured in the private business," said Kirkland Police Corporal Cody Mann.

Detectives say the suspect used a pry bar to get through the front door, rummaged through a desk and may have been looking for keys to open the cabinet that the firearms were locked in. He didn't find any keys, so he headed straight to the back room where he broke the lock on the cabinet. Detectives say he stole three handguns, a rifle and the lower receiver of an AR-15. You can see it in the video sticking out of its box as he exits the inside of the business.

"Our biggest concern is getting these weapons off the street. We don't know where they are now. We have not identified the suspect, so we've kind of run out of leads at this time and we'd like to get our hands on those weapons before they fall into the hands of a wrong person," said Cpl. Mann.

The surveillance video of him outside is from a neighboring business that he walked by after the burglary.

Detectives say the suspect appears to be white. He was wearing a face mask, white shoes and a jacket over a sweatshirt with the Under Armor logo on it.

If you recognize him, or know anything at all that can help police recover the firearms recovered, use the P3 Tips app on your smart phone that you can download for free, or call the hot line at 1-800-222-TIPS(8477).