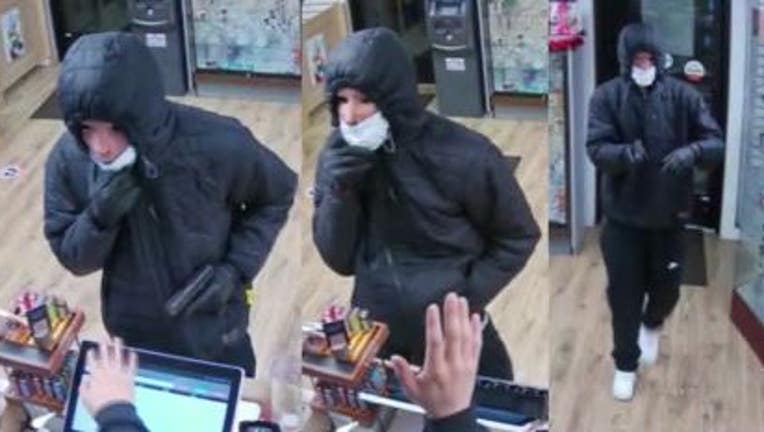 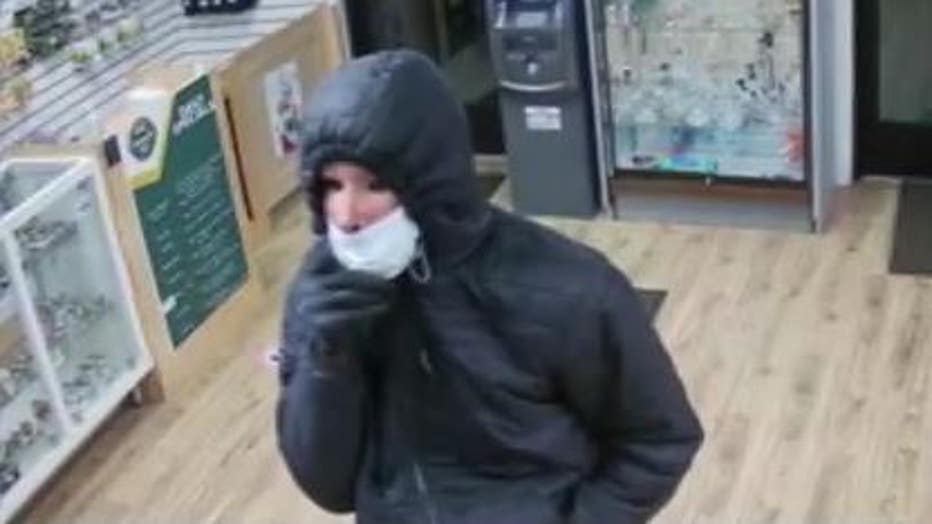 WANTED IN LACEY - Talk about a creepy-looking crook: An armed robber in Lacey wore a rubber mask, kind of like a Michael Myers Halloween mask, with a normal medical mask over it.

He held up a marijuana store on the corner of Martin Way E. and Carpenter Rd. SE just after 8pm on Wednesday, February 10th.

Lacey Police are hoping someone knows the name of the man behind the mask.

"The subject actually can be seen walking from behind the building and spent about 10 minutes at a bus stop nearby and what he's doing is, he's waiting for the business to be empty of other customers, at which point the subject enters the business and he's armed with a firearm, appears to be a semi-automatic handgun, black in color, very consistent with a Glock. He goes straight to the clerk, there's no hesitation, the gun is out, you can see the gun, he transfers the gun from his right hand to his left hand and back-and-forth. He's in there and out in less than a minute, at this point he exits on foot and is seen running back around the business," described Lacey Police Det. Eric Lever. "He has gloves on, he's also got a mask, it's a plastic rubber, some sort of synthetic Halloween-looking mask. He's also got a blue puffer-style jacket and the brand is 'Free Country,’ In the video, you will also see what appears to be a yellow security device, or tag on one of the pockets of that jacket." So, he likely had recently stolen the jacket from a store.

Detectives say he's described as tall, about 6’3" and likely dark-skinned. They say the clerk could see one of the suspect's wrists.

"We want to catch him really bad. He's obviously a threat to the community, a threat to other businesses. His plan was well-thought out. He waited and then he went in, committed his crime, he was in a very short period of time and out, almost appears that this individual may have experience in doing this," said Det. Lever.

If you recognize anything about the suspect, his clothes, or think you know something that could help Lacey Police identify him, use the P3 Tips app on your smart phone that you can download for free to submit the information to Crime Stoppers of South Sound, or call the hot line at 1-800-222-TIPS(8477). It's anonymous and you'll get a cash reward of up to $1,000 if your tip helps identify him.