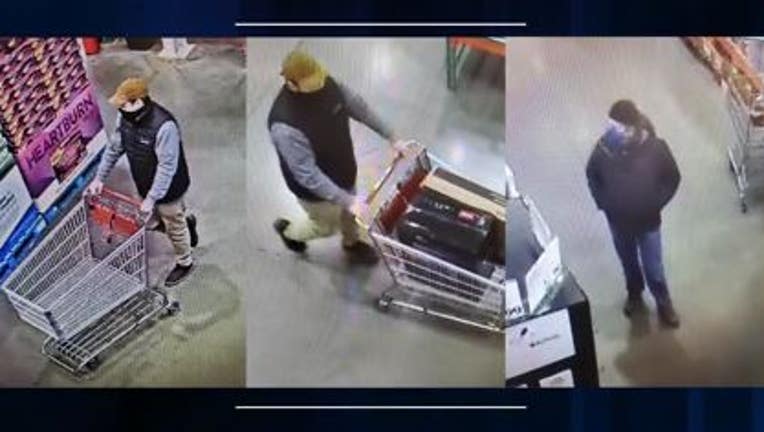 WANTED IN LACEY - I've got a strong hunch this pair of crooks who stole expensive electronics from the Costco in Lacey are big gamers, since the items they took included a $1,500 iBUYPOWER computer and monitor made specifically to play video games.

Lacey Police are hoping you can help identify them, but of course, they're wearing masks, so you can't see their faces well.

Surveillance video from the wholesale store right off I5 on Marvin Rd. Dr. on January 8th shows the suspect in the dark, puffy vest that detectives think is a Patagonia brand. He's strolling down the aisle, all cool and calm, before veering left and opening an emergency exit door. Then, the second suspect comes bolting across from another aisle, pulling his own cart filled with electronics out the backdoor.

"Most likely, with this type of MO, where they're loading up their cart, pushing it out the emergency exit, they're probably hitting other stores, whether it's other Costco’s or other major retailers and I think in apprehending these folks that are doing this, it also gives some reassurance to the public that the police are investigating crimes, all crimes and they're putting in a good effort to apprehend these people, whether it's an assault case, or it's a shoplift from Costco, such as this case," said Lacey Police Det. Eric Lever.

The guy in the vest wore a gray long-sleeve shirt under it, a tan or burnt orange-colored ball cap, khaki pants and dark shoes.

The second suspect work a dark jacket, a blue mask and a black beanie.

If you recognize them, or know a couple gamers who are playing on a brand new iBUYPOWER system, use the P3 Tips app on your phone to submit the information to Crime Stoppers of South Sound. You can also upload photos through the app for detectives to see. Or, call the hot line at 1-800-222-TIPS(8477).

It's anonymous and you're going to get a cash reward of up to $1,000 for each of these theft suspects you can help identify.