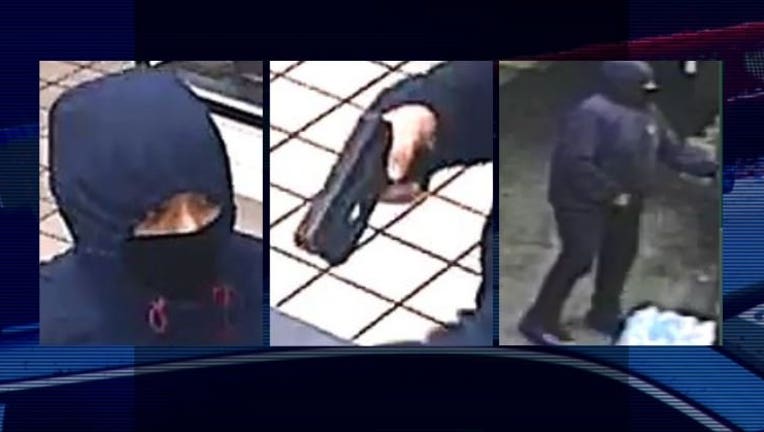 WANTED IN MARYSVILLE --
A convenience store clerk cleaning-up for her graveyard shift -- caught off guard -- and in the sight-line of a laser attached to an armed robber's gun.

Marysville Police are hoping you recognize the suspect or that gun, after the crook hit last week at 3am at the 7-Eleven on Shoultes Rd. and 100th St. NE.
"The suspect entered the store. Has the handgun. Appears to chamber a round into the gun and then points the gun towards the counter, at which time you can see what appears to be a red laser sight on the counter top. The handgun might be somewhat specific that somebody may recognize with this particular person," said Marysville Police Det. Chris Jones. "Pretty bold. Very aggressive, in   the round. Very intimidating towards the clerk. Adds a little bit of added intimidation factor there of chambering the round and implying that they might shoot that person. The laser sight, you know, there's no reason to activate that sight, at that point, other than just to intimidate the person and let it hit the counter top where they can see it, so we're concerned that somebody that's this aggressive is going to try and do something like that again."

The robber had the clerk put cash into a white Bank of America money pouch.

Detectives say the suspect wore a blue Polo jacket with red strings and dark tennis shoes with a light-colored stripe in front.

If you recognize the gun, or anything at all that can help Marysville Police identify this armed robber, use the P3 Tips App on your smart phone that you can download for free, or call the hot line at 1-800-222-TIPS(8477). It's anonymous and you'll get a cash reward of up to $1,000 if your tip helps lead to the suspect's arrest.