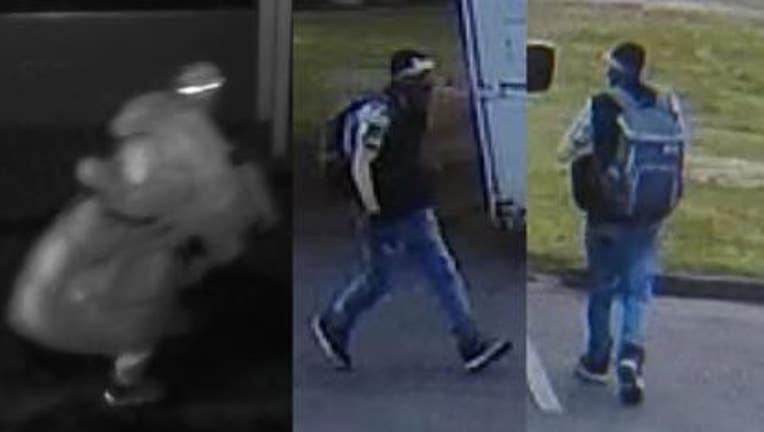 WANTED IN MOUNTLAKE TERRACE - Detectives want you to watch the video above and take a good look at the way the crook in the backpack shuffles his feet with his arms down as he runs to a van that belongs to a food bank in Mountlake Terrace.

Maybe the way he moves will help someone identify the suspect for detectives who say he was quick to pick the lock, start up the van and drive it away from ‘The Concern for Neighbors Food Bank’ on the afternoon of Saturday, February 27th.

"He's wearing a really large backpack, so we don't believe he switched cars or anything. Looks like he might have just been walking by. He's probably local to the neighborhood, people out here probably know who he is and we'd really like to know that," said Mountlake Terrace Police Det. Pat Hatchel.

The van was found and returned to the food bank a few days later, but detectives still need to know this suspect's name who vandalized it by spray painting over the logo.

Police believe he's the same suspect seen on surveillance camera who broke into the food bank at night six days earlier and stole more than $2,000 worth of gift cards from Safeway that were supposed to be given to hungry people.

These crimes have had a huge negative impact to the food bank that hundreds of people depend on every week. "Our van is used five times a week to go to various stores in the area to pick up donations. On average, we give approximately 50 to 70 pounds per person, or per household, between 100 and 110 households, which is between 350 and 400 people," said the food bank’s Director, Mike Begeman.

Crime Stoppers of Puget Sound is offering a cash reward of up to $1,000 for information that identifies the suspect.