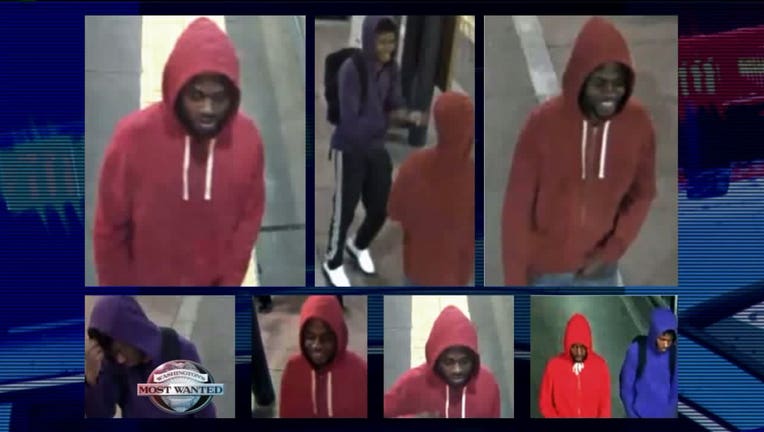 WANTED IN SEATAC - It's bad enough when someone steals your car, but to have it taken at gunpoint is terrifying and reprehensible.

SeaTac Police are trying to identify these two suspects.

Surveillance video gives a really good look at the guy in the red hoodie as they waited for the light rail at the Rainier Beach station on June 27th. Detectives say they took it to the Tukwila International Boulevard Station, that's where they’re seen in the video coming up the escalator. They went into the parking lot and just loitered for a while, before getting back on the light rail. They rode it to the SeaTac Airport Station and detectives say, within minutes of getting off at about 11:20pm, they attempted to carjack one car unsuccessfully when the driver didn't stop and then jumped in front of a second vehicle driving west on south 176th St. "One of them was armed with a handgun. They pointed the handgun at the driver to get them to stop. The suspects ordered both occupants out of the vehicle. Both of the suspects got into that Honda Accord once the victims were out and they took off at a high rate of speed northbound on International Blvd. S. The victims didn't even have time to get their wallets out of the car. They left their cell phones in the car. They didn't grab anything prior to being held at gunpoint and quickly exiting the car,” said King County Sheriff’s Sgt. Ryan Abbott.

Deputies later found the Honda, but everything inside was gone.

Detectives are hoping somebody can identify the suspects. “This is a very terrifying situation for anybody, especially somebody just driving along, minding their own business and then somebody jumps in front of their car with a gun. We owe it to them to try to find out who these suspects are," said Sgt. Abbott.

Detectives think they are in their late teens.