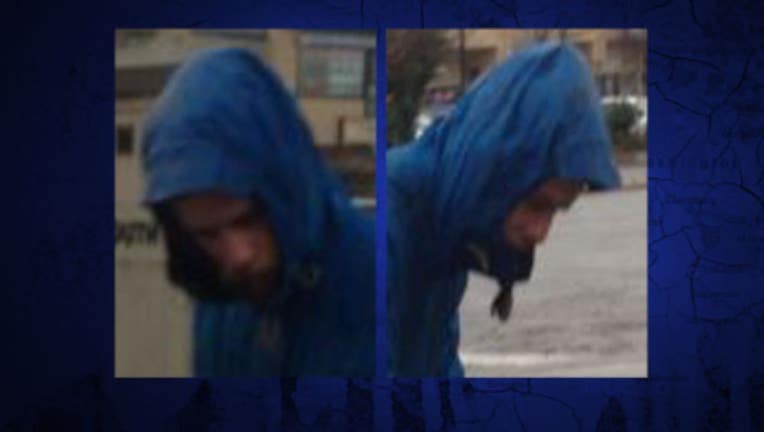 WANTED IN SEATTLE -- Michael Gillespie has been homeless in Seattle on and off for 10 years.  The former fisherman from Montana fell on hard times after a DUI and now sleeps outside. We found him Thursday sitting in the rain at 12th Avenue South and Main Street South, where he spends his days panhandling for food money. "Most people are pretty giving, they'll feed ya and buy you a sandwich and coffee or whatever," said Gillespie. That's why it came as such a shock when Seattle police say a blond-haired or strawberry blond-haired man in a blue jacket robbed him for what little change he had. Gillespie says the thief even pulled a knife on him. "He didn't use it on me. There was no blood," said Gillespie.

The thief might have gotten away with it, but Son Quach saw what was happening. "I told the other guy, 'Call the cops!' and then I said, 'You have to stop!'" said Quach. Even better, he used his cell phone to take two photos of the suspect. "I just wanted to help so I just sent it to the police," said the Good Samaritan who also gave Gillespie some cash to help him out. Robbery detectives are hoping someone recognizes the thief. So does Gillespie. "I think it's a sad situation and I don't wish it on anybody." When asked what he needs right now, Gillespie told me a home and some dry clothes. I talked with his mother, Amy Gillespie, who lives in Montana.  She says they've been worried about her son who they haven't heard from recently. "Please tell Mike that his family is very concerned about his welfare and to let us know how to contact him.  Also please convey to him that he is loved and is always in our prayers." If you know the name of the suspect who robbed Gillespie, call an anonymous tip into: CRIME STOPPERS: 1-800-222-TIPS You must call the Crime Stoppers hotline with your tip to be eligible to receive a cash reward for information leading to a fugitive’s arrest. CLICK HERE for information on how to TEXT A TIP to Crime Stoppers .