WANTED IN EDMONDS --
I've seen way a bunch of bold thieves -- but this guy takes the cake -- or the camera in this case, as Edmonds Police need help identifying him after he stole a surveillance camera from right off their building.

The video shows the guy trying to creep by the camera, but then for some reason, he decides to steal the camera itself. “A public works employee, when they were back on that side of the building, noticed some wires hanging down, and come to find out someone in our parks department had found our camera across the street. They had no idea where it came from, so we ended up putting two and two together,” said Edmonds Police Sgt. Shane Hawley.

Detectives say the camera crook didn't disturb anything else and once they looked back at the tape, they got a clear glimpse of him. “He goes full Spiderman and he's able to get up, attack the camera, pull it down and obviously it ends up across the street. We would definitely like to chat with this guy and figure out why he decided to pull our camera off the wall,” said Sgt. Hawley.

Police tweeted out the screenshot below of the man's face saying, "let's talk."

If you know his name, use the P3 Tips App on your smart phone to submit the information to Crime Stoppers, or call the hot line at 1-800-222-TIPS(8477). It's anonymous and you'll get a cash reward if your tip helps lead to his arrest. 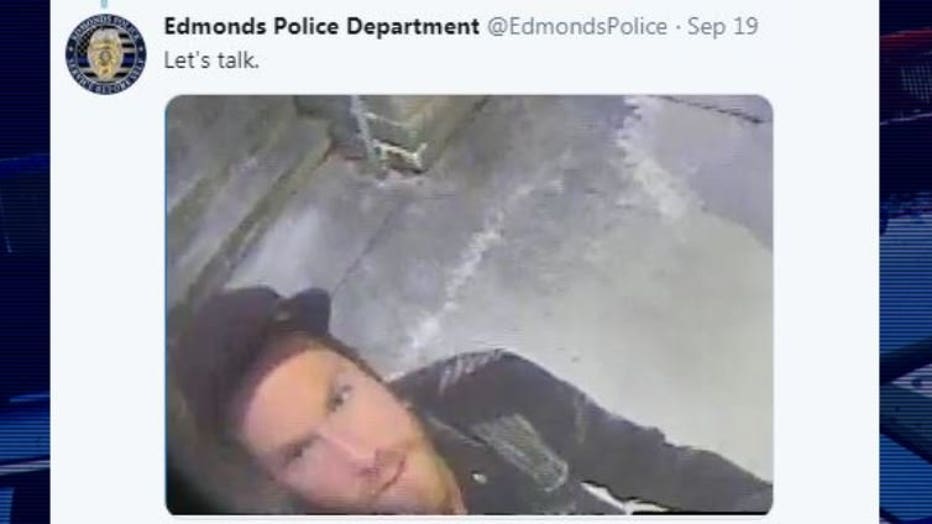