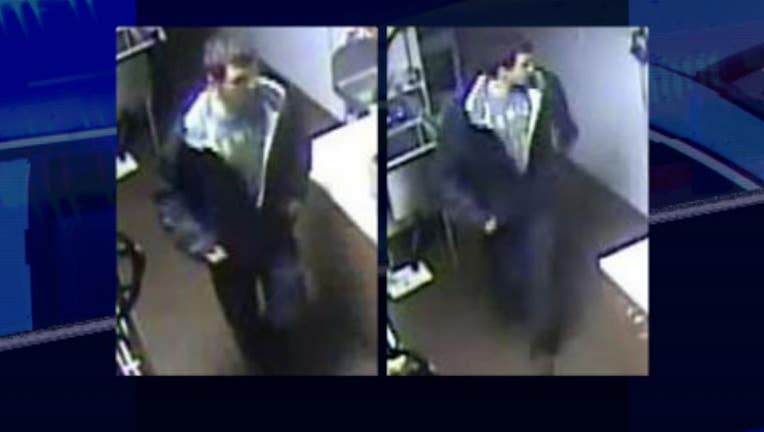 WANTED IN PUYALLUP -- Talk about looking frantic, a burglar broke into Jersey Mike’s Subs in Puyallup through the back door to steal the safe -- not knowing it was bolted to the floor – and Puyallup Det. Mike Lusk is hoping you can identify him. “He`s very hurried, so obviously when he realizes he`s not going to be able to carry this safe away, now he`s frantic and he`s looking in other places where maybe he can find cash.” The store’s assistant manager, Austin Bechtold, showed us how the crook got in. “Right out here is where we had the previous key box and it looks like he just had a hand-held DeWalt or something and just cut the top of it off and tried to get the sides as well and ended up ripping the whole box off, got the keys out.” Once inside, you can tell from the video, the thief knows he's up against the clock. “60 seconds and the alarm goes off and it`s loud,” Bechtold says. Det. Lusk adds, “He`s running around so fast, he`s not thinking clearly, I mean, he even has to tug on the file cabinet several times before he realizes he has to press the button to get the drawer to come out, because he`s jerking on this thing almost everything collapses on him and without even looking he just grabs an armful of what is invoice. The video, it helps, it puts things where even the smallest details, the shirt he`s wearing, there`s a print on the shirt, the sweatshirt, the style of hair, even his own mannerisms will lead someone to say, `I know that person.’”

Bechtold says they've beefed up security and changed out all the locks just in case he's stupid enough to come back. “Every night now we run through every door, check every lock, check every window and make sure everything`s shut. No one leaves by themselves, no one`s here by themselves, we always keep a manager on. The suspect is white with dark brown hair, wearing a blue jacket, t-shirt and jeans. If you can tell Puyallup Police his name, call an anonymous tip into: CRIME STOPPERS: 1-800-222-TIPS You must call the Crime Stoppers hotline with your tip to be eligible to receive a cash reward for information leading to a fugitive’s arrest. CLICK HERE for information on how to TEXT A TIP to Crime Stoppers