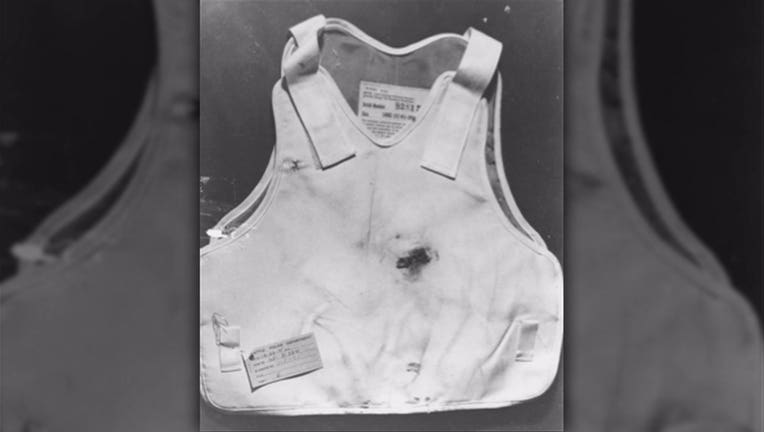 SEATTLE METROPOLITAN POLICE MUSEUM -- The bulletproof vest dates back as far as the mid 1800’s when they were used to stop assassins in Ireland. Now, they are standard life saving gear for police, but they weren't always a welcome addition to the uniform. Seattle police Officer Jim Ritter has more on this ‘Flashback.’ “Prior to the invention of bullet proof vests, police officer's around the nation were constantly worried about being wounded or killed in the line of duty by armed criminals. In the late 1920's, a type of vest was invented, a gentleman's vest that had straps of steal woven into it. It was extremely heavy, uncomfortable and very impractical. The inventor was so confident that this would save the lives of police officers, he would actually wear the vest and have a police officer fire into it, saving his life. It was an instant success.”

In the 1960's, the Dupont tire company was trying to figure out a way to make better tires. One of the developers who worked for Dupont came up with a substance called Kevlar. Kevlar is basically a fabric that with multiple layers can stop traveling bullets. The Kevlar was layered together and a bullet proof vest was designed for officers to wear which was much more comfortable than their predecessor.” “A bullet proof vest from the 1970's is a very simple design with a front and back panel. Officers still did not like wearing these. They were very expensive, hot and uncomfortable. That all changed in 1975 when Seattle Police Officer Ray Johnson was shot in the chest and saved by wearing one of these experimental vests. That set the tone for other departments to mandate the use which all officer's carry to this day.” “Bullet proof vests have saved hundreds of police officer's lives since their inception and as law abiding citizens, we should all be thankful for that.” And that's the way it was. I'm Officer Jim Ritter and this is ‘Flashback.’” If you have questions about law enforcement history, email Ofc. Ritter at smpmuseum@aol.com To find out more about the museum, go to seametropolicemuseum.org