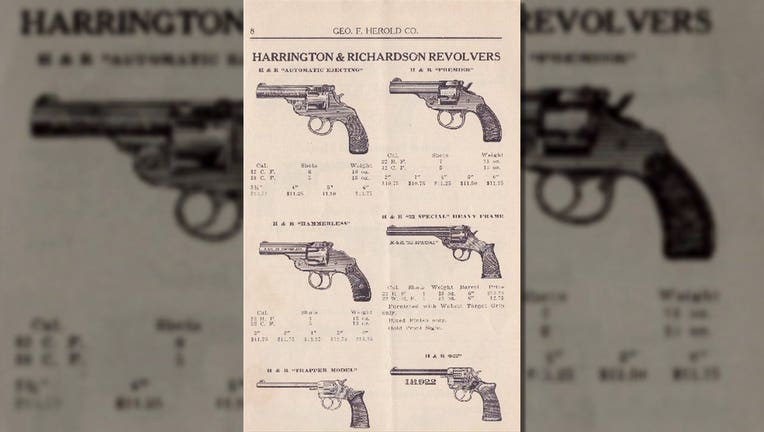 SEATTLE METROPOLITAN POLICE MUSEUM -- "We all know police officers carry guns with them while they are on duty," says Seattle police Ofc. Jim Ritter. "Nowadays, the type of weapon used is a semi-automatic pistol. An example is this is a semi-automatic pistol which can fire 15 rounds, but it hasn't always been that way." "In the early days of policing, in the 1880's up until the 1990's officers carried a revolver that only had 6 bullets in it. Revolvers were large frame. They had long barrels and were kept concealed under the officer's coats. Remember in the old days, officers wore long coats which they had to keep buttoned. The fact that they had to draw their pistol out of those coats killed a lot of police officers because the crooks got the drop on them."

"A way to alleviate that was officers began buying pocket pistols. Basically, it's a small frame revolver. It only holds five rounds and officers could buy these from the Sears catalog for $2.50 in the 1920's. The reason they wanted to carry this instead of the large frame revolver was access. The officers could put this in their coat pocket, they could have their hand on the trigger when they were talking to criminals and if the criminals pulled a gun on them, they'd shoot right through their coat." If you have questions about law enforcement history, email Ofc. Ritter at smpmuseum@aol.com To find out more about the museum, go to seametropolicemuseum.org