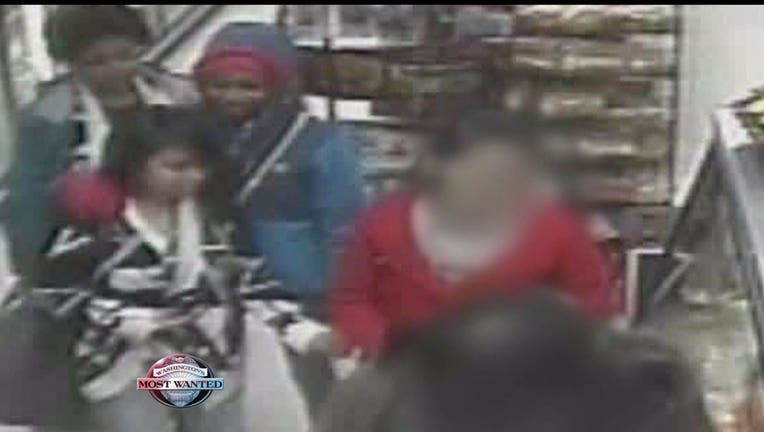 WANTED IN SEATTLE -- They are fast, with nimble fingers and a powerful punch. Seattle detectives need your help identifying three female phone robbers caught on camera ripping-off an exchange student on Christmas day. Watch the video and keep your eyes on the girl in the red jacket. Watch how fast the cell phone robbery happens at Joe’s Mart on 2nd Ave. in Seattle shortly after 5pm. The victim was a Chinese exchange student in the store with her friends. "One of the suspect's reaches up, sees the cell phone in the victim's pocket, pulls it out, enough with where the victim turns and starts demanding her cell phone,” says Ret. Det. Myrle Carner with Crime Stoppers of Puget Sound. “By this time, she hands it off to the second suspect and the first one goes, ‘Hey, I don't have your cell phone.’” From the video, it looks like the second suspect palmed the phone then handed it off to the third who headed to the back of the store. the victim's friend in grey tried to call for help -- that's when one of thieves attacked. "Then all of a sudden, the second suspect just steps forward and pops her right in the mouth, meaning the victim," says Ret. Det. Carner. Watch the part in slow motion and you can see how hard she hit the young woman. All three suspects then quickly left the store. This video is another painful reminder that there are all kinds of people looking to steal your smart phone, so take some advice from Ret. Det. Carner, "After you've used it, put it out of sight, put it in a front pocket, somewhere where you know it’s at so someone isn't just going to see it loose somewhere inside a loose jacket.” Seattle police say the one who took the phone out of the victim's pocket is possibly mixed race, with long straight hair and she was wearing a black and white patterned sweater or coat. The second suspect was wearing a dark blue North Face jacket, pink beanie and pink gloves. The third suspect wearing a blue or green coat appeared to stay out of it. If you recognize any of these accused female phone robbers, call an anonymous tip into: CRIME STOPPERS: 1-800-222-TIPS You must call the Crime Stoppers hotline with your tip to be eligible to receive a cash reward for information leading to a fugitive’s arrest. CLICK HERE for information on how to TEXT A TIP to Crime Stoppers