RENTON -- Kittitas County Deputy Chuck Berg was honored as Washington’s Most Wanted’s May Officer the Month for his quick action in saving a Tacoma mother’s life at the Seahawks 12K race at the Landing in Renton on April 13th. Sara Clerget and her family are huge Seahawks fans.  She, her mom and sister ran the team’s 12K race on April 13th but when she crossed the finish line, her heart stopped.  "I felt fine but the second I stopped that's when I started to feel super, super dizzy,” said Clerget. The 35-year-old mother of a  two young boys had gone into cardiac arrest.  "Coming to grips with what happened, it's still surreal, you can't fathom, I died, I died for two minutes." Clerget was very lucky that day. Kittitas County Deputy Chuck Berg and his wife also ran the race.  "Me and my wife had just finished the 12K and we kind of high-fived and my wife actually noticed it first. She brought the lady to my attention. I looked over there and saw that she collapsed so we went over there immediately got down and ended up checking on her and could see she's in cardiac arrest,” said Deputy Berg.  He teaches Advanced CPR and was able to save Clerget’s life. Near the finish line in Renton on Wednesday, he surprised her with a visit.  "I was dead and he saw me laying there, he knew that I had no pulse and knew that I had no pulse immediately did what he knew to do. I mean I can't thank him enough.” Clerget and her family had been in touch with Deputy Berg through social media but had not met him again in person to thank him. Sara’s mom Julie McKee was especially moved to tears.  She watched as Deputy Berg worked on her daughter. "They said, she's taking a breath. It's like you gave my life back to me so thank you, I can't ever thank you enough,” she told Deputy Berg as she hugged him. Clerget has a defibrillator and is doing well now. Next year, she and Deputy Berg plan to run the race together, then to compete for two minutes using CPR mannequins to draw attention to the importance of learning the life-saving technique.  The winner buys the other dinner. 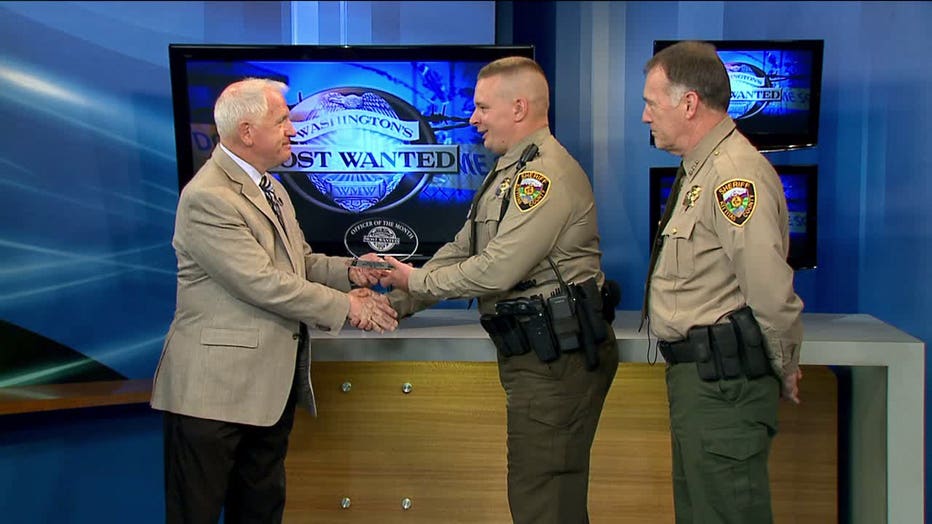 During the WMW Officer of the Month award ceremony at the Washington’s Most Wanted studios in Seattle, Kittitas County Sheriff Gene Dana commended his deputy. “This is typical of Chuck. He's well trained in CPR. He doesn't hesitate to do things like this on or off duty so it didn't surprise me a bit.” For his part, Deputy Berg added humbly, “Things work in mysterious ways so yes I was there in that time and place to run the 12K. I just got to help influence someone else's life.”