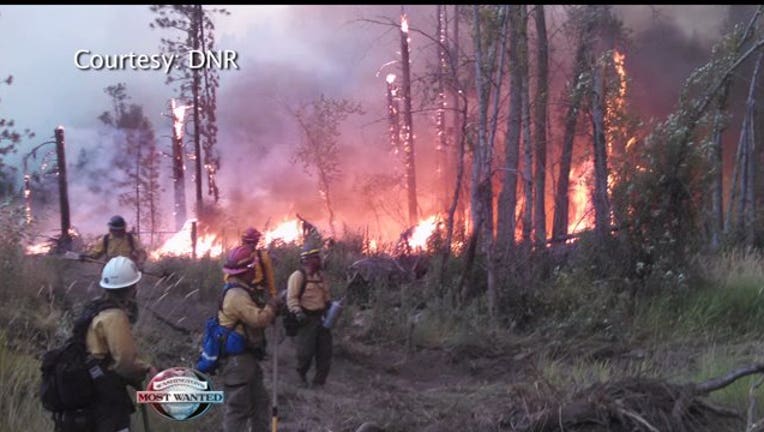 It’s the only job where you fight fire from the air and the ground. Robert Hendrick with the Department of Natural Resources says, “You’ve taken two very crucial high-risk careers, and put them together.” Seven helicopters and thirty crew members make up the “Helitack” team. They battle wildfires throughout the state and are often the first to arrive. Hendrick adds, “A hundred years ago those fires would have run rampant, and run until they burned themselves out. These guys are catching that stuff. They’re right there in the middle of what becomes a firestorm.” And look closely, this crew doesn’t wear traditional  firefighting gear. Because they are so close to the flames, they travel light with only a backpack full of tools. And while the flames are being fought on the ground, the pilot is in the air looking for a water source.

“It could be a stock pond, it could be a river, a bend in the river, it could be lots of different river sources,” says Pete Peterson, chief pilot with DNR of Washington state. Their bucket holds about 240 gallons of water at a time that can leave a water trail for a couple hundred feet. “The commitment is like nothing else, it is a family. Once you put on the D.N.R. patch, you become part of the family,” Hendrick said. A family of heroes fighting for communities now and the future as well.  “At the end of the day when you’ve saved somebody’s house, it’s great satisfaction,” adds Patrick Lance a pilot for D.N.R. Hendrick says, “The better job we do of saving our natural resources of Washington, it’s the legacy for our children and grandchildren. That starts here.”