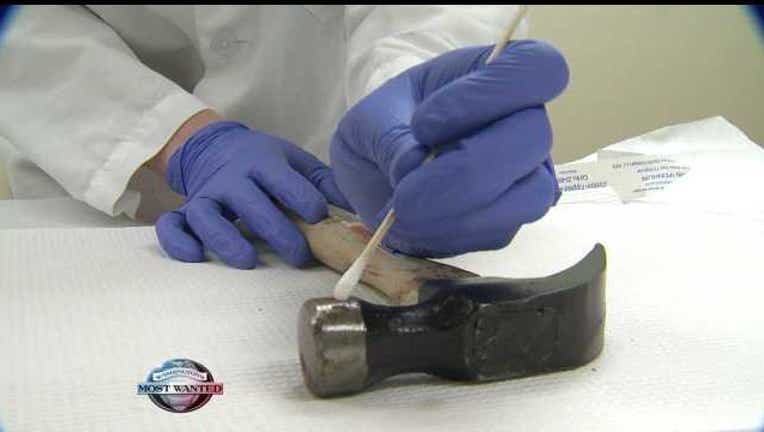 Sometimes it takes years to solve a murder. Bellevue police recently charged a man with raping and killing a 19 year old woman thanks to DNA – giving justice to the victim’s family 32 years after her death. But, even with more recent cases, it can take quite a bit of time to get DNA results to detectives. Washington's Most Wanted's Parella Lewis went to the state crime lab to find out why. “I’m going to test the red, brown staining on this hammer to see if it’s really blood.” Those words are all in a days work for forensic scientist, Jennifer Reid. She works at the Washington State Patrol Crime Lab, and handles every technical aspect of criminal evidence processing. “We could be in trace analysis, or firearms. I’m a DNA analyst so I specifically look at bodily fluids.” She’s one of only forty forensic scientists in the state so her case load is pretty heavy. Reid says, “Usually there’s anywhere from five to ten requests that we may complete individually within a month, so maybe 100 to 120 cases in a year.” That’s a lot, but even working as fast as they can, the lab has a backlog due to the volume of cases they handle and state budget cuts. “It does have an impact with rush cases or those kind of things because those come in and we need somebody to take those, so if we don’t have the staff we need then those might have to sit a little longer”, Reid explains. Fortunately, relief may be on the way. George Johnston is the quality process manager for the crime lab and says “We have a number of positions open in the lab and we’re trying to get permission to fill those. With the economy the way it is, we have to get written permission to fill those.  We have a number of positions that are available, but only a number that we can hire for.” Seattle alone may have three vacant spots this year. Fortunately the backlog and staff shortage isn’t much of a concern for Reid. She gets the job done and loves doing it. “The coolest part is that you can have an impact on things that there are actually cases that are solved through DNA, where they didn’t have a suspect, but you produce a piece of evidence that provides a person’s name for an investigator.” If you’re interested in applying for one of  the open spots, log onto their website at www.wsp.wa.gov