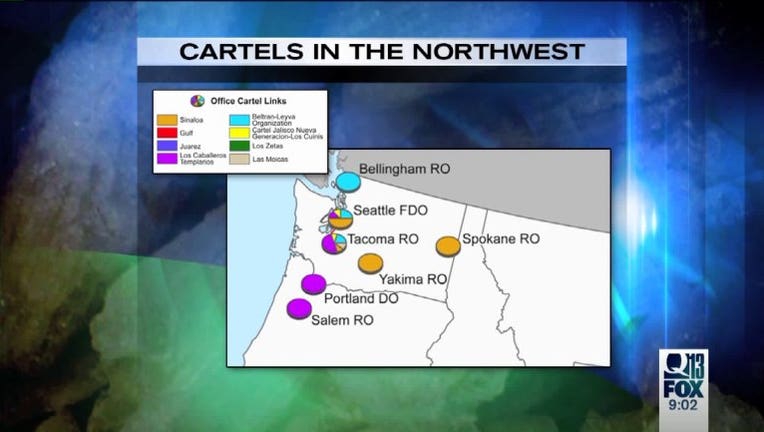 A drug epidemic is fueling crime in western Washington and now we know where it is coming from. The DEA has already seized more meth this year than ever before and it can be traced right back to the cartels.

“It just gives you a burst of energy and it winds you up and you go and go,” said Dixon who is 45 days clean.

For 9 out of 10 heroin users, meth is their secondary drug of choice.

“Methamphetamine is a dark horse riding side by side with heroin,” said DEA Acting Special Agent in Charge Doug James.

Likewise, deaths have risen as well. In King County, there were 15 meth related deaths in 2009, 70 last year and the DEA says the drugs can be traced back to the Mexican Cartels.

"You know we're 1,277 miles from the SW border, but that's a 20 hour car drive, 20 hours they can have the drugs up here for distribution and this is a lucrative market here in the Pacific NW,” said James.

Calling them the greatest criminal drug threat to the U.S., a newly unclassified DEA intelligence report uses graphics to show which cartels are the most active here. The Sineloa cartel, led by Joaquin Guzman who escaped from a Mexican prison in July has the biggest presence. The cartel is active in Seattle, Tacoma, Yakima and Spokane.

"The Sineloa cartel is like a consortium of independent trafficking groups that have come together for a common goal. There are multiple heads to the organization with lieutenants. It's run like a Fortune 500 company and if you cross them, they're gonna do harm to you,” said James.

The DEA says next in size is the Beltran-Leyva cartel operating on the Canadian border in Bellingham. The Knights Templar cartel is operating in Seattle, Tacoma and Portland. The New Generation cartel has a small foothold in Seattle but is one of the most dangerous and fastest growing criminal organizations in Mexico. And the DEA worries could spread here.

The DEA has set up a tip line where you can report dealers anonymously. Just text "TIP411" and start your message with "TIPDEA."