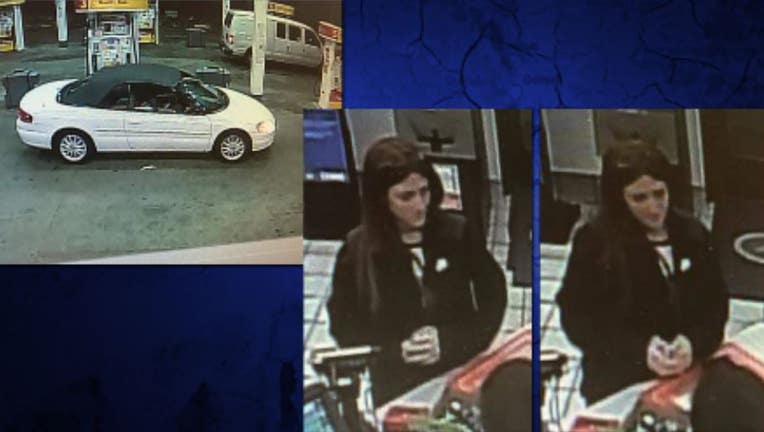 WANTED IN NORMANDY PARK -- This case is just so despicable: A pregnant mom dropping off her two kids at daycare -- preyed on by car-prowling purse thieves. Surveillance photos show the woman Normandy Park police need your help identifying who used Laura Sivan's stolen credit card at a gas station. Laura says her cell phone and the rest of her personal information was also stolen within just a matter of minutes. It`s usually pretty quick, just in and out, drop them off, give them kisses, say goodbye. Two, five minutes max. I went to grab my phone to see what time it was, and there was no phone. My phone was in my purse and there was no purse.”

Laura is six months pregnant and surely doesn't need this kind of stress. She says within an hour almost $1,000 worth of charges were made on her debit card, once that card was frozen her other cards were used at two gas stations in Des Moines -- including the one where we see the suspect -- as well as a fast food restaurant in Federal Way. Laura says she knows she left her car doors unlocked -- something she'll never do again. “I`m so paranoid now about making sure my car doors are locked. I press the lock button like six times, every time I go now just to make sure.” So, let’s help get some justice for this soon-to-be mom of three. Take a good look at the identify theft suspect and the white convertible she was driving with its soft-top up. If you can tell Normandy Park detectives her name, call an anonymous tip into: CRIME STOPPERS: 1-800-222-TIPS You must call the Crime Stoppers hotline with your tip to be eligible to receive a cash reward for information leading to a fugitive’s arrest. CLICK HERE for information on how to TEXT A TIP to Crime Stoppers