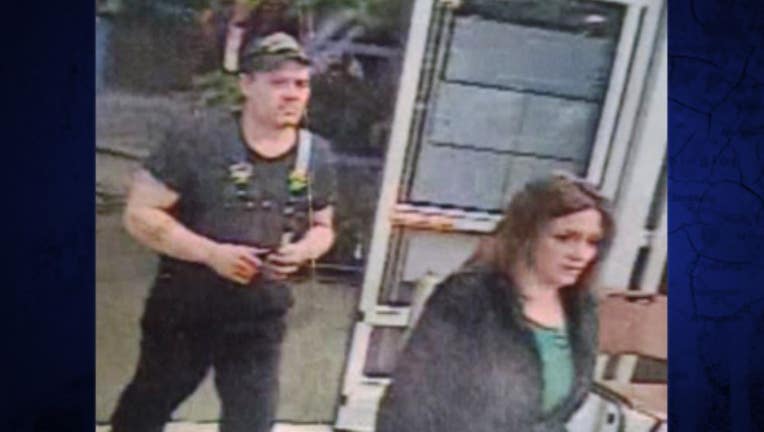 WANTED IN YELM -- This case serves as a warning to anyone dropping off their kids at daycare -- keep your doors locked while you go inside -- because while you think you're safe from criminals, lowlife car prowlers like this pair of suspects are waiting to prey on you. "She realized her card was being used at the Yelm Walmart,” says Yelm Police Det. Bill DeVore. “She went to the Walmart and called law enforcement. When law enforcement arrived they were able to look at the video surveillance and observed and male and a female come into the store, carrying the purse. They used the card twice while in the store and they actually used one of the checks that the victim had in her purse."

The guy wore suspenders and you can tell he has a tattoo on his right forearm. If you can tell Yelm detectives their names, call an anonymous tip into: CRIME STOPPERS: 1-800-222-TIPS You must call the Crime Stoppers hotline with your tip to be eligible to receive a cash reward for information leading to a fugitive’s arrest. CLICK HERE for information on how to TEXT A TIP to Crime Stoppers