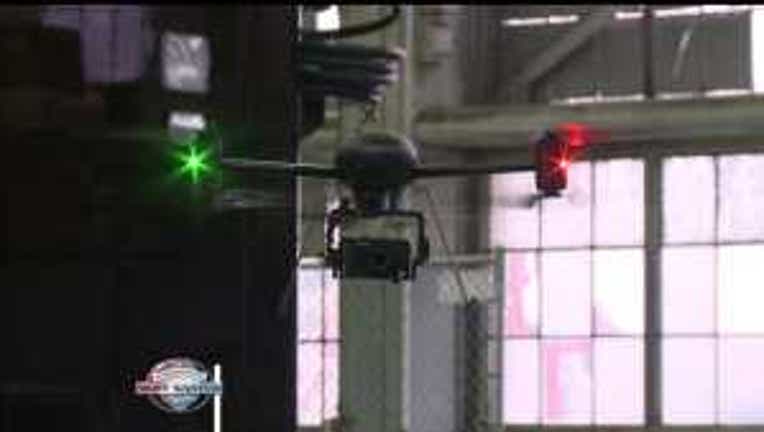 SEATTLE -- Seattle police have a new tool in the fight on crime - a small, remote controlled drone helicopter that gives them a unique viewpoint. The three pound aircraft can carry an array of cameras and send still shots, video and even thermal images to officers on the ground in real-time. “This is a great camera platform,” Lt Greg Sackman said. “You can put it up a couple of hundred feet and look at the entire scene and they can use that for their investigation.” The helicopter is a new and unique crime fighting tool. The Seattle Police Department is one of only five agencies in the country that have permission to use it. Even though the helicopter can't fly above 400 feet or in bad weather, officers consider is an extremely valuable tool. “Putting a camera in the air, it allows us more situational awareness,” Officer Jim Britt said. “We can look ahead of where we`re going. We can pick up threats ahead of time before we round a corner.” The helicopter's operator has to be licensed by going through the pilot license program. The drone comes with some controversy. Some citizens and groups, including the ACLU, have concerns about how police plan to use the machine. They want to be sure the unmanned surveillance aircraft is being used for proper police work - not political activity. In answer to the concerns, Ofc. Britt, on behalf of Seattle police, assures the public it never needs to worry about being spied on. "The concerns involving police surveillance, they`re appropriate when you`re talking about aircraft that flies 35,000 feet and stays up for three days  and is watching all the time. With an aircraft like this, it`s flight time is limited to under 20 minutes, it has to be deployed from a Seattle police vehicle, so when we're on scene, you`re going to know that we`re there.'