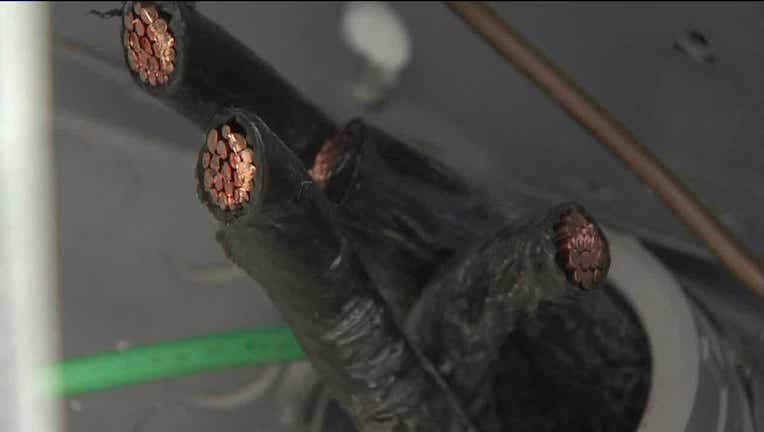 Copper wire theft is one of the fastest growing crimes in the U.S. and law enforcement agencies are calling it an epidemic, with an estimate 90 percent of the crimes committed by meth addicts. But police are fighting back with special training that helps them enforce the laws and keep copper where it belongs. “The FBI has indicated that there’s so much theft taking place that it’s causing a national infrastructure issue,” Lt. Terry Alling said. It’s a growing issue in Washington state. Alling recently held training sessions for Lakewood police officers on how to be good copper cops. “It runs from everything from the single operator to the large gangs. We’ve dealt with gangs that have over 25 people -- they’re very regulated, they have a structure,” he said. Last year Spokane police had almost a mile of copper wire stolen from their substations. In Olympia, tax payers picked up a $30,000 bill for stolen copper wire taken from street lights. “We’ve changed the locks in all the systems, we’ve gone to gluing down doors on the boxes -- nothing is stopping them,” George Fifer with the Federal Way Soccor Association said. Three soccor fields in Federal Way had thousands of dollars in stolen copper last year and after more than $150,000 in damage, city officials in Auburn welded thousands of junction boxes shut. Alling said it’s demand from China and Korea that keeps the copper business booming. “They’re driving, they’re buying all of the copper that they can get their hands on,” he said. “It’s speculated that they’re stockpiling and there’s not going to be any slowdown whatsoever for an extended period of time. The price is going to stay up which means that theft is going to stay up there as well.” That means victims continue to pay as well. “The Department of Energy estimates that for every $100 that a copper thief actually gets in stolen materials, it costs $5,000 in repairs.” Until recycle yards play by the rules and law enforcement gets educated and united. “It has grown so substantially over the past couple of years that we're trying to play catch up somewhat and get officers educated and let them know how to use those resources and network together because they go from one jurisdiction to the next and we’re all being victimized,” Alling said. Alling said cops should be on the lookout for thieves with tools like headlamps, bolt cutters and a change of clothes. Police should also search the area where the copper was stolen because often, the bad guys stash the metal nearby until they can remove it without getting caught. If you're in law enforcement and would like to get free training, Alling is holding a one-day class Jan. 30 at the Kent Fire Training Center.