WANTED IN BAINBRIDGE ISLAND --
Store surveillance video catches a pair of expensive construction supply crooks getting a good chuckle at the expense of mail theft victims on Bainbridge Island.

This makes me so mad -- and concerned for other homeowners on the island, because detectives say these two fraud suspects caught on camera at a Home Depot in Federal Way could be preying on more people they're doing work for right now .

"It creates a lot of distrust between the community members and the people that they hire,” said Bainbridge Island Police Det. Erik Peffer. “We suspect that this is probably something where someone hired a construction company to do some house work on their home. The contractor, or the subcontractor's that were involved more than likely got a hold of these people's information and then created these false accounts and so it makes people worry about who they choose to do business with, especially when it comes to home remodels."

Bainbridge Island Police detectives say the two men are suspected of opening fake accounts at other stores as well.

They think the pair could be paying other people to steal the mail to get the personal info for them – so identifying these two could lead to solving several related cases and busting a pretty big crime ring.

They were definitely cool and calm while waiting to walk out with several sheets of plywood and the rest of their more than $2,000 score. "They're seen with three different carts of items, anywhere from roofing materials and drills and other items and you see them wheeling up to the check stand, you can see the transaction being made, you can see the other guy working with a contractor desk and obviously telling him who he's trying to be, because that account is in that person's name and being able to utilize that fake credit account to purchase those items. A lot of these guys know that they're on camera at a lot of these large retail stores and for someone to set up a credit account like this and then very shortly thereafter go and purchase a bunch of material, is pretty brazen."

Detectives say the suspects set up the account and used it within 12 hours, so they work quick.

Again, while the mail thefts happened on Bainbridge Island -- likely at the hands of totally different people -- the two suspects used the information in Federal Way, so they could possibly live or work in the south King County or Pierce County area.

Take a good look below at the white work van they drove that had a bunch of wood and a large ladder all strapped to the roof.

If you recognize the suspects, call the hotline anonymously at 1-800-222-TIPS, or use the P3 Tips Apps to submit the information to Crime Stoppers. 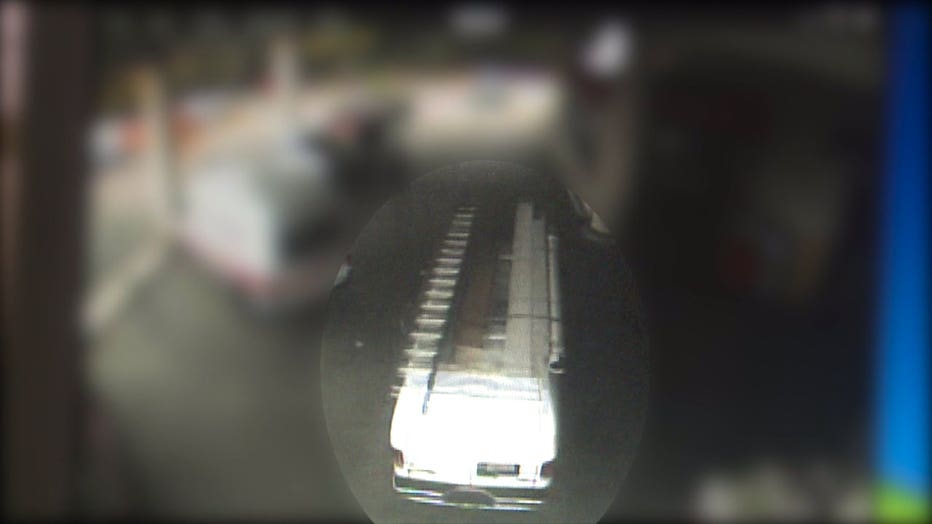