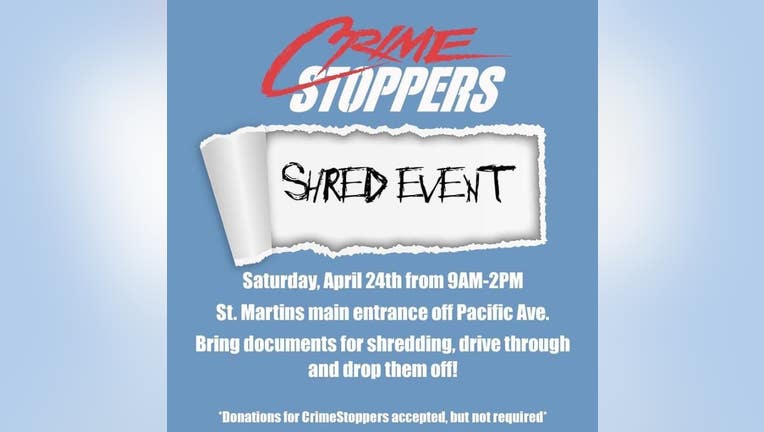 LACEY - Bellevue Police say a business owner may have helped identity thieves after he allegedly threw his customers' information into a dumpster without shredding it.

A victim in the case, who asked us not to disclose their identity, says they’re outraged their information ended up in the wrong hands. "If I were to talk to anyone else, I would say, ‘Don’t just take your papers to some place unless you can see them shred it on site,’ because after this I’ll never trust anyone."

And, that's exactly what Crime Stoppers of the South Sound is offering when it holds its annual shredding event later his month -- letting people watch their personal documents get shredded right there on-site.

The event is on Saturday, April 24th from 9am to 2pm at the main entrance to Saint Martin's University off Pacific Ave. in Lacey.

"It's quite an operation. It's quite exciting. You show up, bring your documents and you can actually watch your documents being shredded. It doesn't cost anything, but donations are accepted, of course, it goes to Crime Stoppers, which is an incredible organization that assists in apprehending criminals," said Lacey Police Det. Eric Lever. "It's incredibly important to shred your documents and destroy your documents, because of what's on those documents. I can tell you as a detective, the amount of fraud and forgery-related cases that I take on are significant, in fact, those are the majority of my cases, so make it more difficult for folks, shred that sensitive information that you have."

Several law enforcement agencies will also be there for even more peace of mind, so if you have any important personal documents that need to be disposed of properly, be sure to show up and take advantage of the shred event on April 24th.