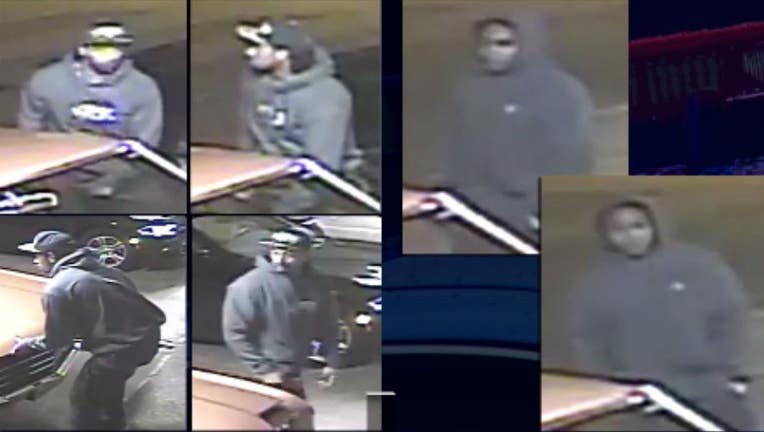 WANTED IN SEATTLE -- Seattle Police are trying to identify two thieves who spent an hour trying to steal a woman's car -- but this wasn't just any vehicle. Laura Boos has only had her classic car for two months. “It's a 1972 Chevelle Malibu. 6 cylinder. It is my baby.” From her photos, you can tell she really loves it's unique and beautiful lines. "They were just done right. They're simple machines,” so Laura was heartbroken when she came out to find the steering column ripped open -- and angry when she saw surveillance video of the two suspects who tried to steal it. “It's pretty amazing because as you can see, there are security cameras right over it." The video shows the thieves pull up in their own car. The driver gets out and comes around to look over Laura's Chevelle, even takes a peek inside and then opens the hood. The two leave but not for long. "Come back with whatever they think are the proper tools, make a stab at it, doesn't work." That's because her car had a dead carburetor, not knowing that one crook tore into the the steering column -- destroying it -- while the other acted as a lookout.

"I know I have a nice car and it made me feel like I was punished for having it." Until now, her Chevelle had survived the test of time in good shape: 43 years old and 54,000 original miles, now violated by a couple of low-life thieves and it's not like she can just order a brand new steering column. "Messing with a classic car. your messing with more than just someone’s money and someone’s property, your messing with their emotions their pride and all of that too." Laura posted the video of the thieves on social media and now Seattle Police are asking for the public's help in identifying the crooks who were probably looking to strip the Chevelle for parts. "They sell a quarter-panel, a window, a top, the seats,” says Ret. Det. Myrle Carner with Crime Stoppers of Puget Sound. “They can make a lot of money, so these guys are selective. The chance is that they're doing it in other parts of our city, so we really do need your help." If you know their names, call an anonymous tip into: CRIME STOPPERS: 1-800-222-TIPS You must call the Crime Stoppers hotline with your tip to be eligible to receive a cash reward for information leading to a fugitive’s arrest. CLICK HERE for information on how to TEXT A TIP to Crime Stoppers