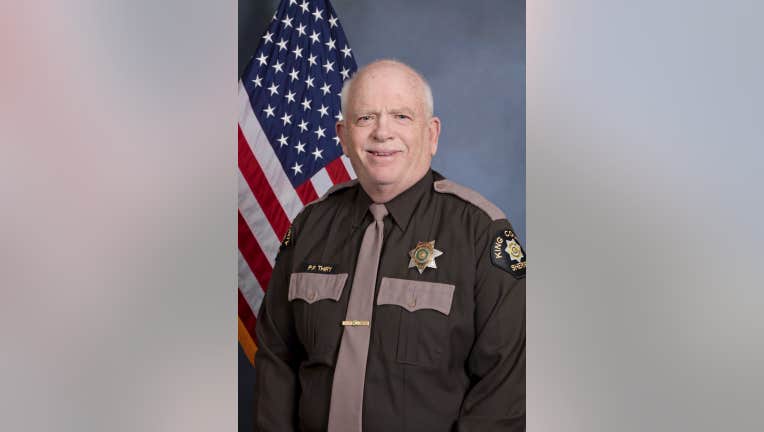 KING COUNTY - A long-time King County Sheriff's deputy is finally pulling the pin and retiring after an amazing 49 years with the department.

His colleagues call Ret. Dep. Pierre Thiry a legend and he might be familiar to Mariners fans, because Thiry has worked security for the M’s since their first game in 1977.

So, fittingly, with T-Mobile Park as the backdrop, his fellow deputies honored him for his service.

Photos given to Thiry at the celebration this month tell the story of a life of service.

"Treat everybody the way you would want to be treated, if the shoe was on the other foot. The other one is don't ever lie to people. Tell them straight-up what the situation is," said Ret. Dep. Thiry.

Be fair. Be tolerant. Talk to people. Traits he passed along to his son, Tacoma Police Officer Jeff Thiry. "Seeing him go to work happy every day, with a big smile and then coming home with that same smile, I just knew that it was something I wanted to do and I'm looking at these pictures here, you know, it's a lot of memories for me," said Ofc. Thiry.

Those memories for Jeff include ride-alongs with his dad in the summer. "He's still, to this very second, my mentor in law enforcement," said Ofc. Thiry.

Off-duty, Pierre worked security for the Mariners for 43 seasons, spending his last one as a cutout in his customary spot watching over the bullpen. "All the years that I worked for the Mariners, which is from the time they took their first pitch in the Kingdom, until last year, if they end up in the World Series the first year that I retire, I'm gonna be upset," said Pierre.

The friendships he's made along the way made it hard to retire. Even people he'd busted for DUI would come up and say hello. "They reminded me that I arrested them and I changed their lives and things like that," said Pierre.

In his final assignment, Thiry worked in the Civil Process Unit with the difficult task of serving eviction notices with his partner, Det. Debby Schmitz. "You're one of the best partners I've ever worked with. I love every minute," said Det. Schmitz.

Thiry worked with her dad before he retired. "I learned a lot from him on just the way he treated people and it made his job so much easier," said Debby.

Time and time again, Pierre has proved he has a huge heart behind his badge. "During some of the people's most low part of their lives, Pierre did his job and he treated people with compassion, respect and dignity," said King County Sheriff’s Sgt. Bob Lurry.

Now, Pierre says after 49 years on duty, it's just time. "I have a large commercial fishing boat. I’ll head out to the ocean here and start fishing more. I enjoy it and it kind of gets you away from things," said Pierre. At least, until the next Mariners home game, where now-retired Deputy Thiry will be there in the stands.