SEATTLE -- Cell phone thefts are on the rise.

“Everywhere in King County, getting a smartphone snatched out of your hand is happening more and more because people are not paying attention," said King County Sgt. DB Gates.

The latest victims were riding the Light Rail from SeaTac to Seattle on July 1 and July 3.

In the first robbery, surveillance video shows a man in a red hoodie grab a victim’s phone just as the doors to the train were closing.

"This guy pulled the victim to the ground and that's how bad he wanted that phone,” Gates said.

The thief was able to exit the train and get away.  Detectives are hoping someone can tell them the crook’s name.

"They understand what your M.O. is when you're texting or looking down playing games on your phone and they're taking advantage of that, that your attention is divided,” said Gates.

In the second robbery, a woman named Deborah who we are not identifying for her safety says she was targeted by a thief.

"I saw a guy getting ready to get off but he looked as if he spotted me and decided not to get off the train."

The man in a blue shirt with a grill or braces followed her to the back of the train.

"He was basically trying to shoot the breeze and trying to get a hookup."

When Deborah shot him down, the thief decided he wasn’t leaving empty-handed.

"He grabbed my phone and just pulled it. I was trying to hold onto it. I said, oh my God, I'm not letting this phone go.  He yanked it so hard that it literally pulled me out of the chair."

She chased him for four blocks but he escaped. 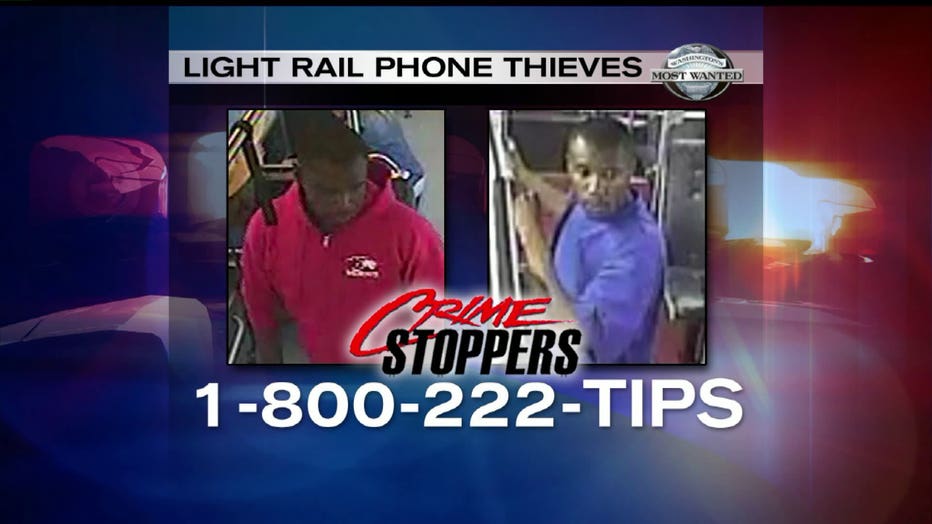 Deborah is an artist who had photos of her works on the phone, along with pictures of a recent trip to Hawaii.

It’s a tough lesson for both robbery victims but one of the suspects left behind a clue.

If you recognized either of the suspects, Crime Stoppers will pay you a cash reward of up to $1,000. Call the hotline anonymously at 1-800-222-tips.