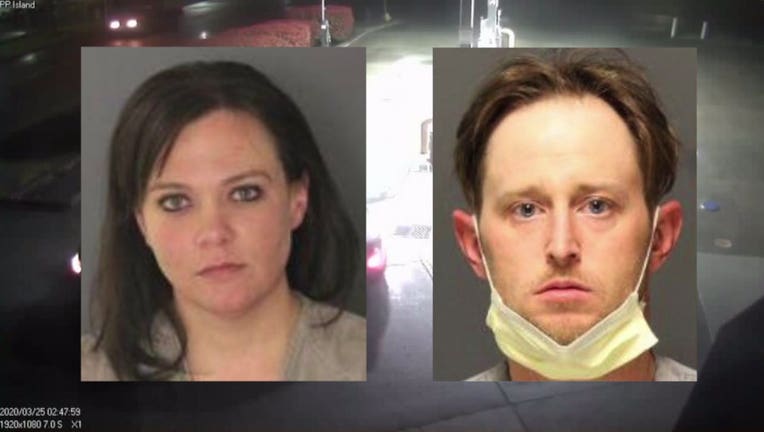 CAPTURE UPDATE  June 26, 2020 --
Huge props to the Kirkland Police PROACT Unit and to the Washington's Most Wanted viewer for the tip to Crime Stoppers of Puget Sound that led to the arrest last week of three suspects accused of breaking into the Kirkland Public Works maintenance center on March 25th.

Detectives say they stole tens of thousands of dollars worth of tools and a city truck later found in Bellevue.

The three suspects showed up in two cars, one of them a grey Acura TL. The break in the case came after a viewer submitted a tip to Crime Stoppers identifying the driver of the Acura as 39-year-old Jason Howard from Sumner.

Detectives in the PROACT Unit then tracked down Howard, 36-year-old Alisha Crusch and 51-year-old Richard Hughes and arrested them after extensive investigation and surveillance.

Kirkland Police say they were able to obtain a confession from one of the suspects, but have not yet located the stolen tools.  Some of the tools were pawned for cash.

King County  Prosecutors have charged Howard  and Hughes with Burglary in the Second Degree, Theft in the First Degree, two counts of Theft of Motor Vehicle, Violation of the Uniform Controlled Substances Act (Meth).  Detectives say charges on Crusch are pending.  All three are free awaiting trial.

Howard and Crusch were previously featured on Washington's Most Wanted in 2018.

FUGITIVES WANTED IN KIRKLAND April 17, 2020 --
In the early morning hours of March 25th, the City of Kirkland Public Works Building was burglarized by two unknown male suspects. A third unidentified person, acting as a look-out, assisted by parking a vehicle a short distance away from the building which is located at 904 8th St. in Kirkland.


When city employees arrived at work, they discovered that numerous vehicles were prowled, a large number of tools were taken from the vehicles and a City of Kirkland Public Works truck had been stolen.

The City of Kirkland vehicle was later located abandoned, when Bellevue Police Officers were dispatched on a separate stolen vehicle report in their city. Video surveillance shows the same suspects left the City of Kirkland vehicle in the 3000 block of 118th Ave. SE and stole another pickup truck belonging to a local business in the area. This second stolen vehicle out of Bellevue was located two days later, unoccupied, in Sumner near the 4000 block of Parker Rd. E.

Video surveillance at the Public Works Building and a nearby business in Kirkland showed the suspects arriving in two different vehicles, forcibly entering the City of Kirkland fenced property and stealing the tools and the vehicle. Video of the stolen vehicle shows one of the suspects driving the vehicle away at approximately 4:30am and the other two suspects driving their vehicles as they follow the City of Kirkland truck out of the area.

If you can help Kirkland Police locate the vehicles, or identify the suspects, call detectives at (425) 577-5656, or submit an anonymous tip to Crime Stoppers of Puget Sound at 1-800-222-TIPS(8477), or use the P3 Tips App on your cell phone. You can also submit photos and info at www.P3Tips.com. There is a cash reward of up to $1,000 for information leading to an arrest in the case.